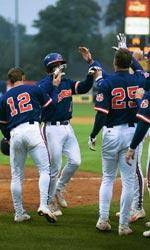 Comcast/Charter Southeast has announced it will televise four Clemson baseball games this season. Mike Sheeley, Vice President of Comcast, has agreed to broadcast the games beginning with a March 26 matchup between Georgia and Clemson at newly renovated Doug Kingsmore Stadium.

Comcast/Charter Southeast will televise three games in April, including two between South Carolina and Clemson. On April 2, Clemson and South Carolina will be broadcast live from Sarge Frye Field in Columbia. The following Wednesday, April 9, will feature a live broadcast of the same teams at Doug Kingsmore Stadium. The final broadcast of the four-game package will be a game on April 16 against Coastal Carolina, which will also be played at Doug Kingsmore Stadium.

To find out if your local cable network carries Comcast/Charter Southeast, which has over 4,000,000 viewers in the southeast, visit the internet link below. All major carriers in South Carolina are listed as well.