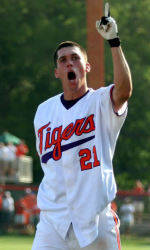 Clemson, SC-Former Clemson All-American Tyler Colvin will be a member of the Chicago Cubs Opening Day 25-Man Roster when the Cubs travel to Atlanta to face the Braves in the season opener on Monday, April 5 at 4:00 PM. Cubs Manager Lou Piniella made the announcement on Sunday.

Colvin has had an outstanding spring, hitting .468 in 20 games for the Cubs. He has 29 hits in 62 at bats with two home runs and 13 runs batted in. On Saturday he might have clinched his spot on the roster when he had four hits in five at bats against San Diego. He had a home run and two RBIs in the contest.

Colvin made his Major League debut last September when he played in six games for the Cubs. He was three for 17 at the plate on those contests.

Colvin played for Clemson from 2004-06. He was a first-team All-American according to Baseball America that year when he hit .356 with 13 home runs and 70 RBIs. He led Clemson to the ACC Tournament title, the program’s first in 12 years, and was named first-team All-ACC and ACC Tournament MVP. He is most remembered at Clemson for his walk-off grand slam in the Super Regional of the NCAA Tournament against Oral Roberts that year. That Clemson team reached the College World Series.

Colvin was the number-13 selection of the June 2006 draft by the Cubs.