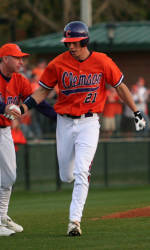 Clemson, SC – It hasn’t taken long for former Clemson All-American Tyler Colvin to make a name for himself with the Chicago Cubs. Colvin, who played at Clemson from 2004-2006, made the Play of the Day on MLB.com on Tuesday night in the Cubs’ 7-2 win at Milwaukee. It also ranked as the number-six Play of the Day in sports on ESPN.

In the ninth inning, the Brewers Ryan Braun, an All-Star, drove the ball to centerfield where Colvin went back to the wall, leaped over the fence and denied Braun his 30th home run of the season.

Colvin also had a hit and a run scored for the Cubs on Tuesday. He made his Major League debut on Monday night for the Cubs and was also one-for-three at the plate in a Cubs victory.

Colvin was a first-team All-America outfielder at Clemson in 2006 when he batted .356 and led the Tigers to the College World Series. He hit 13 home runs that year, including a walk-off grand slam in the NCAA regional against Oral Roberts. He was the number-13 selection of the Major League draft that June by the Cubs.