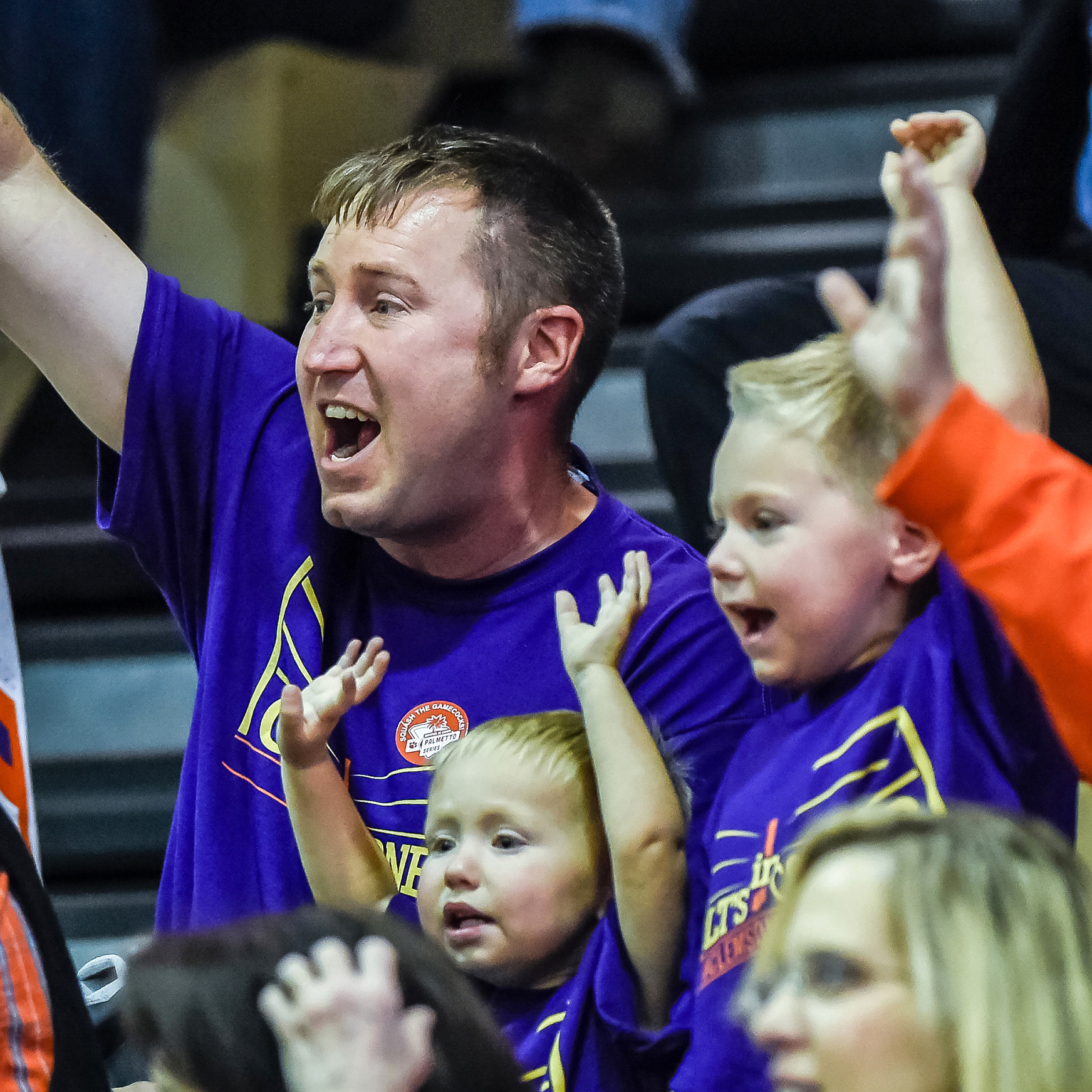 “It is probably the most devastating news that you can ever hear as a mother that your child has cancer,” Kathy Becker said as she recalled the journey her family and her son, Colt, have endured over the past year and a half.

On May 29, 2014, Colt Becker, the son of Clemson women’s basketball director of operations Kathy Becker, celebrated his first birthday with family and friends. Three weeks later on June 18, Becker and her husband, Pete, received the news that Colt had Neuroblastoma, a rare form of cancer found in children two years old or younger. The cancer is so rare that in the upstate of South Carolina, doctors only see about three to four cases per year.

Following Colt’s diagnosis, the Beckers began to fight the disease the only way they knew how…by attacking it head on as a family and with the support of their Clemson family.

Head coach Audra Smith was extremely impressed with how the family handled the incredibly challenging hand they were dealt.

“I don’t know if I could have been as strong as they have been,” stated Smith. “They have been unbelievably strong. And there were times when they broke down, but they’ve still managed to balance it all.”

Colt had an uphill battle to climb, as the tumor near his kidney had grown and was pressing on his vital organs. Under the advisement of Greenville pediatric hematology and oncology Dr. Alan Anderson, the Beckers took Colt to nationally renowned surgeon Dr. Michael P. La Quaglia at Sloan-Kettering Cancer Center in New York City.

Following a surgery to remove his softball-sized tumor, Colt endured more than 10 rounds of chemotherapy at Greenville Children’s Hospital. On April 29, 2015, Colt and the Beckers received news that the cancer was in remission.

“Colt took it all in utter and complete stride,” smiled Becker. “Kids are resilient, and he is living proof of toughness, resiliency and a fighter attitude. No one can take that away from him now.”

Over the span of three days from June 23-25, 2015, the Clemson athletic communications office released a three-part documentary titled, “In Colt’s Corner,” which detailed the family’s journey as Colt fought Neuroblastoma. The documentary was produced not only to tell Colt’s story, but also to raise awareness for Neuroblastoma and pediatric cancer in general. However, Becker wanted to do even more to raise awareness with the hope that Colt’s story could inspire other families going through the similar situations.

Becker teamed up with Caitlin Hartley, a marketing employee in athletics, to designate the Clemson women’s basketball game on November 18 against rival South Carolina as a Pediatric Cancer Awareness game that would honor Colt’s courage and determination, and also help to raise money and funds for Neuroblastoma research. The game came to be known as “Colt’s Game.”

The game featured numerous promotions that encouraged fans of both teams to donate to the cause. Clemson women’s basketball started a “Pledge It” campaign online, where fans could donate a certain amount of money for every free throw the Tigers made in the contest.

The players warmed up in “Colt’s Corner” t-shirts, and Colt was honored at halftime along with his father, Pete, and older brother, Paxton. Despite not quite understanding what was happening, Colt received a standing ovation from Tiger and Gamecock fans alike who rose to their feet to honor the young boy.

Clemson fought valiantly against No. 2 South Carolina. Even though Clemson lost the game, the Clemson family still had a lot to be proud of following the contest.

Fans and supporters donated $98 for every made free throw, and the team ended the night with 10 makes from the charity stripe. After two hours and one rivalry game, $980 had been raised for Neuroblastoma research. Donations continued to pour in after the game as well. The final total reached $1,080.

“I told the players before we came out to play that we have to think about the big picture, and at the end of the day, we are family,” said Smith. “The entire Clemson athletic department and the entire Clemson community is family. So for us to have an opportunity to come out and do something special for Colt is big. And that’s what we’re all about.”

The proceeds from “Colt’s Game” benefitted “Chase After a Cure,” a Summerville, S.C., based non-profit organization that focuses on Neuroblastoma research. “Chase After a Cure” personally reached out to the Beckers shortly after Colt was diagnosed and helped support the Beckers throughout Colt’s fight against the disease.

“‘Chase After a Cure’ is extremely grateful for the Clemson University community, the athletic department and most of all the women’s basketball team for their support,” the organization said in a statement. “‘Colt’s Game’ was a wonderful and unique opportunity to raise awareness and funds to fight this terrible disease. Behind every child is a community, and in this case, there is Clemson University. ‘Chase After a Cure’ and childhood cancer advocates alike are so proud and thankful for their efforts.”

The Clemson family came together for “Colt’s Game” and not only honored Colt and raised awareness for pediatric cancer, but also supported “Chase After a Cure.” The money donated will help save the lives of children affected by Neuroblastoma. Only four percent of cancer research funds benefit pediatric cancer, and therefore, awareness is key in the fight against these rare diseases.

“I think that to raise over $1,000 in our first year is pretty amazing,” stated Becker. “There is so little known about Neuroblastoma, and throughout our family’s battle there was so much uncertainty. Every little bit that we can contribute to research could help another family not have to go through as many ups and downs as we did.”

The entire family has endured many ups and downs throughout the past year and a half, and Becker will be the first to say that her family is eternally grateful for its membership in the Clemson family and the support that comes along with it.

“The athletic department, fans and community were unbelievable,” said Becker “To feel the love from, not only our friends and family, but also from people we never met, was very comforting. It gave us a lot of strength, knowing that so many people were in Colt’s corner.”

At the end of the day, the hero of this story is Colt. He has been through more in his first two and a half years of his life than most people go through in a lifetime. He has shown incredible courage and strength and has served as an inspiration for his family and for the Clemson family.

“Right now, Colt is so young that he doesn’t understand anything that he’s been through,” added Becker. “Unfortunately, to him, it is normal. But fortunately, we have the wonderful documentary, We will be able to show him his story as he gets older.

“We want him to know what he has been through and what a fighter he has been. Our hope is that he can continue to inspire others throughout his life, whatever path he chooses.”