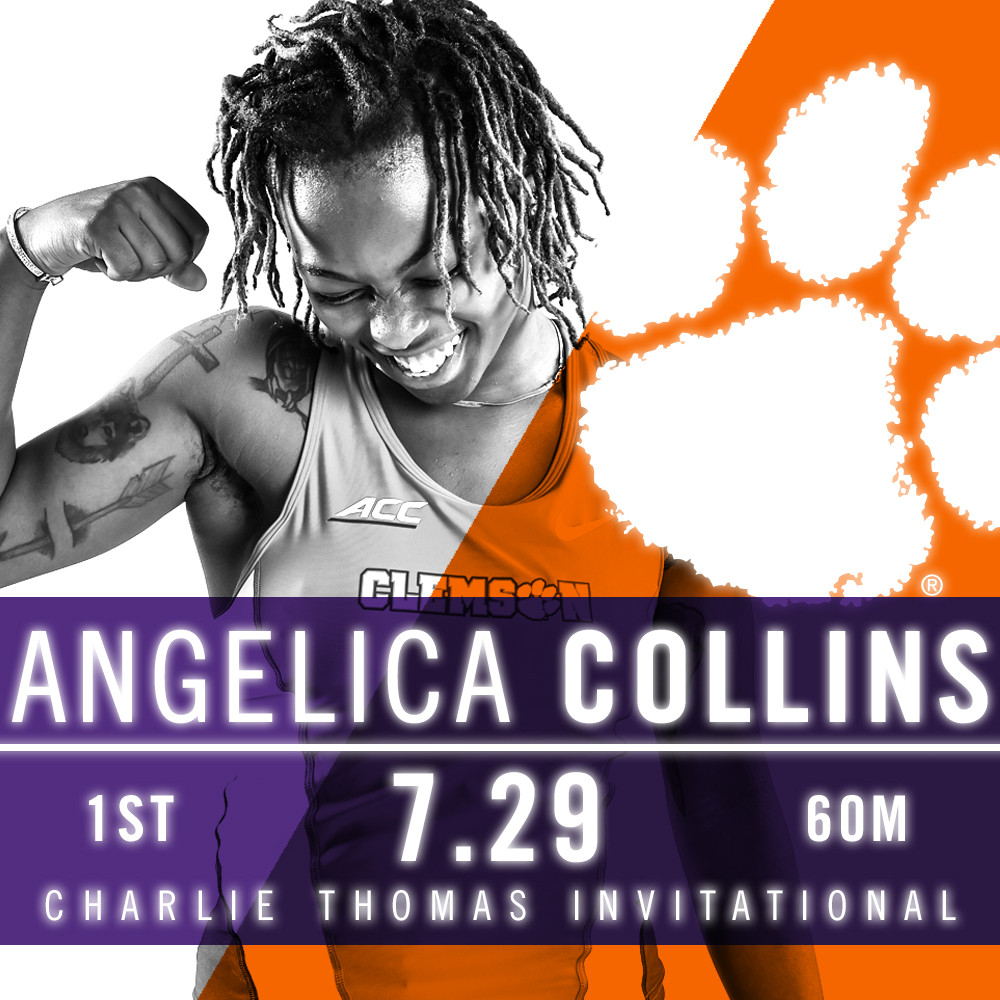 Collins Breaks Through In College Station

COLLEGE STATION, Texas – On a day full of impressive efforts for Clemson, Angelica Collins found away to set herself apart from the rest in her best meet as a Tiger. The junior registered two personal bests to win two events as the Tigers concluded the Charlie Thomas Invitational. Collins’ pair of first place efforts fueled the women’s third place effort behind Texas A&M and Baylor despite the team not competing at full strength.

Collins began her day by firing off the best 60 meter time of the preliminary round when she crossed the finish line at 7.41. She then proceeded to win the long jump with a personal best leap of 19-9.75 on her final jump of the series. The mark is a personal best by 8.25 inches with her previous best of 19-1.5 coming at the Clemson Invitational earlier this season. Following her performance in the long jump, Collins was back for the 60 meter dash in which she ran the eighth fastest time in the nation to win her second event of the afternoon. Her time of 7.29 is a .11-second personal best and seats her with the sixth best time in program history.

Torie Robinson and Sabria Hadley joined Collins in the 60m with fifth and eighth place efforts respectively while Iana Amsterdam wasn’t far behind in the long jump with her third place mark of 19-0.75.

Markeeta Thomas also walked away with a crown of her own as she won the 60 meter hurdles in 8.42. In the mile, Ersula Farrow ran the ninth fastest time in program history when she took third in the event with a time of 4:47.81. She was followed by Alexa Womack in fifth place with a personal best time of 4:56.01.

Madison Huffman and Lakeisha Warner also ran personal best times in their events as Huffman took fifth in the 3,000 meter run while Lakeisha Warner placed sixth in the 800 meter run behind Dana Maydew who finished fifth. Olivia James and Malayshia George ran well in the 400 meter run as James took second with a time of 53.79 and George finished eighth.

James, Thomas, Farrow and George finished the afternoon combining for the women’s best 4×400 meter relay time of the season. The group finished third overall with a time of 3:38.27.

On the men’s side, Cordell Lamb with a personal best effort in the 200 meter dash prior to assisting the 4×400 meter relay team to the second fastest time in program history. Lamb started his day with a fourth place finish and a time of 21.19 in the 200m and later teamed up with Michael Cheeks, Terrell Jackson and Jeffrey Green for a second place time of 3:07.15.

In his first race back from injury, John Lewis tied his indoor personal best in the 800 meter run when he clocked in at 1:49.39 to take second in the event. Chad Fennell trailed Lewis in eighth.

Mpho Makofane ran the third best mile time of the day, completing the event in 4:08.99 with James Quattlebaum not far behind in sixth place at 4:10.68.

Away from the Charlie Thomas Invitational, Grace Barnett ran a personal best 9:18.78 in the 3,000 meter run at the Armory Invitational. The time was good enough for sixth place overall and is the second fastest time in program history.

The Tigers are back in Clemson next weekend, February 10-11, to host the highly anticipated Tiger Paw Invitational. The meet is scheduled to be one of the most competitive meets in the country in preparation for the championship season ahead.