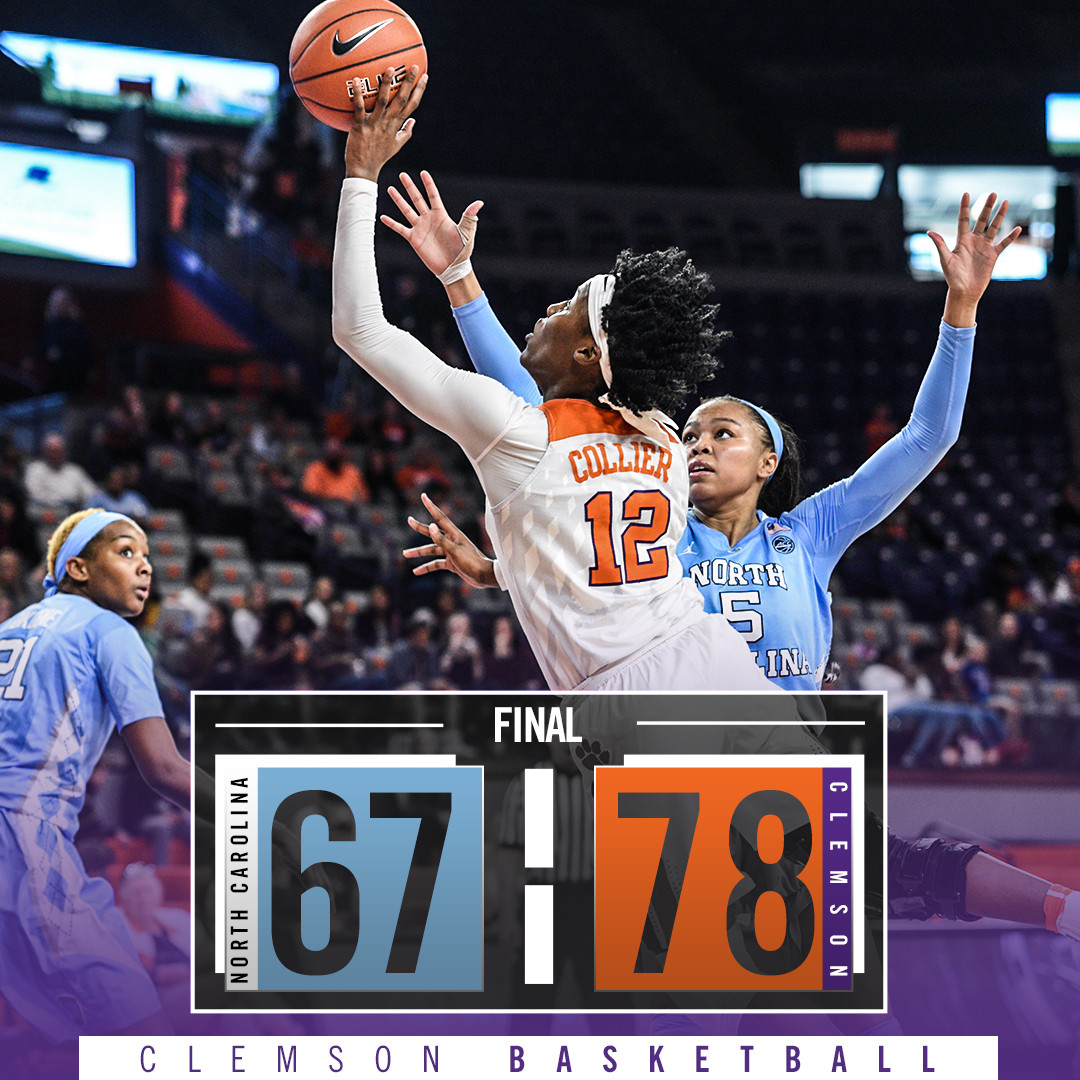 CLEMSON, S.C. – Four Tigers finished in double-figures in scoring, led by career highs from sophomore Aliyah Collier (27) and freshman Kobi Thornton (19), to help the Clemson women’s basketball team come from behind to defeat North Carolina 78-67 on Sunday afternoon. With the win, Clemson improved to 13-11 (2-9 ACC), while the Tar Heels dropped to 13-10 (2-8 ACC).

North Carolina was on fire shooting in the first half, finishing at 58.1% (18-for-31) from field goal range and 50.0% (6-for-12) from behind the arc. Collier single-handedly started a Tiger comeback in the second quarter, scoring 13 of her 15 points in the period and finishing the first half shooting 6-for-8 from field goal range, 3-for-4 from the free throw line, and with five rebounds (four on the offensive glass) and two assists.

Clemson went on a 22-12 run in the third quarter, erasing what was once a 15-point deficit. A basket by freshman Jaia Alexander and a steal and fast-break layup by sophomore Danielle Edwards tied the game at 51-51 with two minutes remaining in the third period. The Tigers tied the score three more times before taking their first lead at the 4:24 mark in the fourth quarter on a made free throw by Alexander. From there, Clemson kept the momentum going, outscoring the Tar Heels 25-13 in the quarter to win by double figures.

As a team, the Tigers outrebounded the Tar Heels 44 to 32, which included 17 offensive boards. Clemson outscored the Heels 48 to 22 in the paint and 29-8 on the fast break, while recording 10 steals and forcing 15 North Carolina turnovers.

Collier finished the game with 27 points and 14 rebounds, her seventh double-double of the season, and was an impressive 11-for-14 from field goal range. She also added three steals, two assist and a blocked shot to the Tiger effort. Thornton recorded 19 points and 11 rebounds for her second-career double-double. The rookie was 6-for-10 from field goal range and 7-for-9 from the free throw line, and also tallied two blocked shots in the contest. Edwards (14) and Alexander (11) were the third and fourth Tigers in double figures. Edwards gave a solid effort all-around, finishing the game with five rebounds, six assists and three steals.

The Tigers have five ACC regular season games remaining, and four of the five are on the road, beginning with a Thursday, Feb. 9 contest at Pittsburgh. The game between the Tigers and Panthers is scheduled to tip at 6:30 p.m. and will be televised on RSN.