Note: The following appears in the The Citadel gameday football program.

Colleen Finney may have enrolled as a freshman in January as a member of the Tiger volleyball team, but she was more than acclimated to Clemson’s campus long before she could call herself a college student or student-athlete.

Finney and her family, who attended many Tiger football games during her younger days, have a close and long-standing connection to Clemson. But now, the Finney-family-Clemson pipeline is more concrete than ever before, as her lifelong dream of becoming a Tiger student-athlete is now a reality.

“I used to always come up for home football games and go to bowl games, too. We always used to tailgate with family friends who I went to elementary and middle school with. Their tailgate was right outside of Memorial Stadium, so we would tailgate with them and then go to Tiger Walk.”

Finney, a native of Blythewood, S.C., and her family’s roots with Clemson run deep, despite their proximity to the Tigers’ in-state rival, South Carolina, which is approximately 20 miles south of the Finney residence.

Her mother, Elaine, is a two-time Clemson graduate who earned her undergraduate degree in 1984 and her master’s degree in 1992. Her sister, Felicia, also graduated from Clemson (‘19), and her twin brother, Jerry, is Finney’s fellow freshman classmate.

“One thing I always think about is when I was in elementary school and we’d have the Palmetto Drive. I used to bring so many cans, because I would hate it if South Carolina would win. It would make me so mad.” 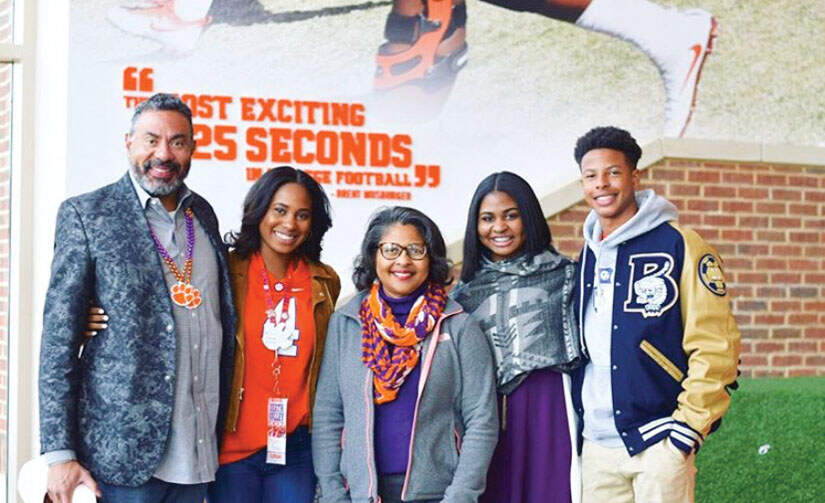 As if her passion for Clemson was not obvious enough, Finney and her siblings, without a doubt, bleed orange and purple. One could claim that the Finneys brought good luck to Clemson, as her mother and sister were fortunate enough to call themselves Clemson students when the football program won each of its three national championships in 1981, 2016 and 2018.

Finney was a standout player at Blythewood High School, where she garnered back-to-back South Carolina region player-of-the-year honors (2018,19). In November, Finney and fellow newcomers Camryn Hannah, Cate Long and Anna Renwick were all named AVCA All-Americans, making Clemson one of just two programs in the country to have four incoming All-America selections.

During the recruiting process, Finney was coveted by multiple schools in the state, but she knew she had to be purely objective when it came to choosing a school to play volleyball. It was a path that still led her to Tigertown.

“But when I came to Clemson, it felt like home. There’s a family vibe, which is just something that other schools couldn’t create, and I love the coaches here. I love the vision of Coach (Michaela) Franklin and all of my other coaches. I love the atmosphere. It was something I can’t describe. I couldn’t find anywhere else like it.”