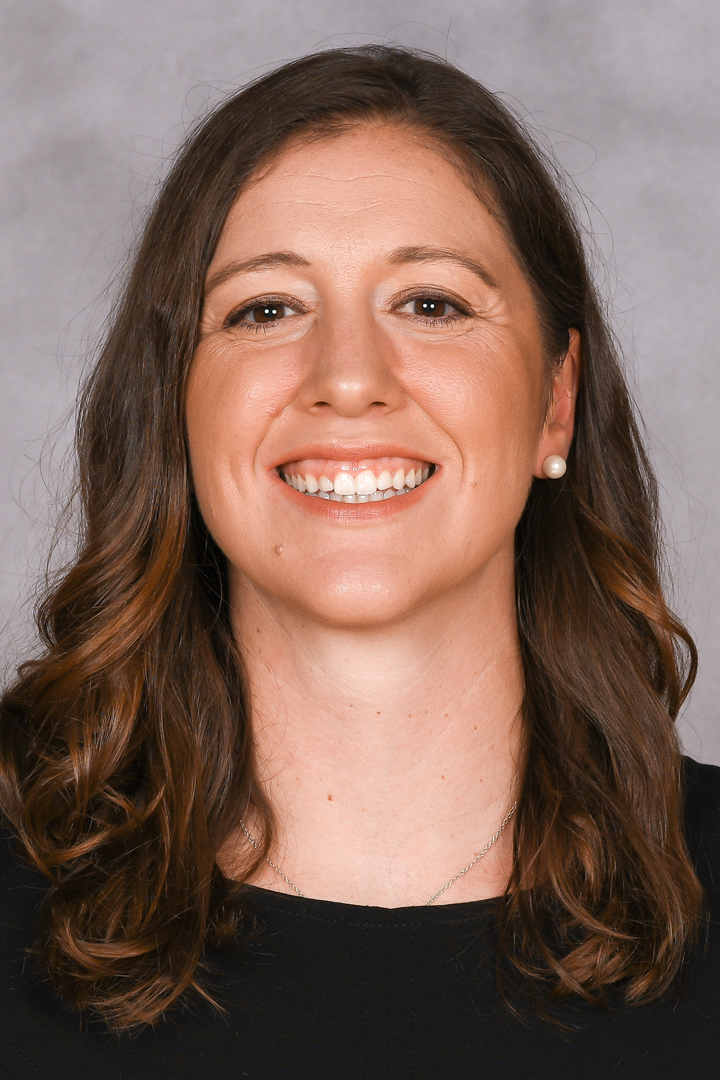 Jackie Simpson Kirr, a two-time All-American setter at the University of Wisconsin-Madison, completed her first season at the helm of the Clemson Volleyball program in 2021 after serving as the Associate Head Coach and the team’s offensive and recruiting coordinator for four seasons. Simpson Kirr joined the staff on April 24, 2017 and was promoted to head coach on May 6, 2021.

Since arriving at Clemson, Simpson Kirr has helped guide the Tigers to their first postseason appearance since 2009 with an appearance in the National Invitational Volleyball Championship (NIVC) in 2018 and has mentored five different players that earned All-ACC accolades on seven occasions. Simpson Kirr has also raised the bar when it comes to recruiting. After bringing in two recruiting classes that were given honorable mention recognition by the AVCA, Clemson’s 2020 recruiting class was tabbed No. 24 in the nation and was just one of two recruiting classes in the nation to feature four All-Americans.

In her first season as head coach, Simpson Kirr led the Tigers to accomplishing numerous feats, including defeating Rutgers in three sets on Sept. 17 for the first win Clemson has had over a Big Ten opponent since 1999. Under her guidance, Clemson started the season 10-3 to mark the best start since 2014 and also started 2-0 in ACC action for the first time since 2011. The Tigers posted a perfect 8-0 mark against non-conference opponents in Jervey Gym and finished with 59 block solos on the year, the most in both areas since 2014. The 2021 season also played host to the third-fewest attack errors in program history, and the 12-win season is the most wins in the inaugural season of a head coaches’ tenure since Jolene Hoover won 27 in 1993.

During the unprecedented 2020 campaign, Simpson Kirr and the Tigers opened the season with a 3-2 upset victory over No. 12 Miami (Fla.). Then freshman outside hitter Camryn Hannah finished with a standout first season in the Clemson Orange and Regalia under Simpson Kirr’s direction. Hannah picked up All-ACC Second Team and ACC All-Freshman Team honors after leading all freshman in the ACC in kills and kills per set. She also garnered an AVCA All-Region East selection and AVCA All-American Honorable Mention. Simpson Kirr guided freshman Cate Long to finish eighth in the NCAA for total aces (38). Both Hannah and Long also garnered a combined four All-ACC weekly honors during the year.

In 2019, Simpson Kirr and the Tigers went 3-0, including a sweep over SEC foe Georgia and a four-set win over a 2019 NCAA tournament qualifier in Kennesaw State, to win the annual Big Orange Bash tournament. Clemson’s 2019 non-conference slate was also highlighted by the program’s first-ever win over Central Arkansas as well as victories over Appalachian State and Oral Roberts. Simpson Kirr and the Tigers made history in the month of October that year when Clemson downed four straight ACC opponents, a first for the program since 2012. Outside hitter Kaylin Korte garnered Second Team All-ACC status for the second time of her career, having done so in 2017, after Korte tied for fifth in the conference in kills (3.58/set). Additionally, freshman setter Mckenna Slavik was one of just five Power-5 freshman setters to average at least 9.70 assists per set.

In 2018, Simpson Kirr mentored then redshirt-sophomore Brooke Bailey, a transfer from Ohio State, who earned Second Team All-ACC honors after she finished the regular season ranked fifth in kills (3.71/set) against ACC opponents. Additionally, former Clemson setter Gabby Easton and right side hitter Solei Thomas were named to the All-ACC Freshman Team. Easton was the top freshman setter in the conference after leading all freshmen in the ACC in assists during the regular season with 1,278 (10.74/set), which also put her at No. 3 overall in the ACC. Her 10.74 assists-per-set average was also good for fifth in the nation among all freshmen and ranked third among Power-5 freshmen. Easton’s 1,278 assists were also the second most by a freshman in program history, a milestone that she reached with two matches remaining in Clemson’s regular season. Thomas ranked second on the team in kills after averaging 2.89 kills per set in 2018. Thomas totaled 17 double-digit kill matches, including a career-best 20 kills against Appalachian State (Sept. 1, 2018). Both Easton and Thomas were named ACC Freshman of the Week on two occasions each. The 2018 ACC postseason awards announcement marked the first time since 2011 Clemson collected three ACC postseason selections. In the spring of 2018, Clemson’s incoming recruiting class was given the highest honorable mention by PrepVolleyball.com.

Since joining the Tigers’ staff, Simpson Kirr has lured three Power-5 transfers to Clemson in outside hitters Bailey (Ohio State) and Korte (Illinois), and former Clemson setter Caroline Pearson (Arizona State). In 2017, Simpson Kirr guided Korte to Second Team All-ACC status, who led the team in kills (3.36/set) and attempts (9.67/set). In the Tigers’ opening match of 2017, a win over Bethune-Cookman, Simpson Kirr steered Pearson to tally 57 assists, which was second-most in a four-set match among all ACC players in 2017.

Simpson Kirr was the Head Coach at George Mason in Fairfax, Virginia from 2015-16. In her first season with the Patriots, she led the team to the best Atlantic-10 finish in program history and its best overall record since 2010. While at the helm of the Patriot program, Simpson Kirr served on the AVCA All-American Selection Committee in 2016, during which time she was the East Region Committee Chair. She also earned the AVCA’s 30-under-30 Award in 2015, a prestigious national honor awarded to the top 30 volleyball coaches, at any level, under the age of 30.

Simpson Kirr was a standout setter both on the court and in the classroom at Wisconsin from 2004-07. She led the Badgers to four NCAA Tournament appearances, including two Elite Eight berths. Simpson Kirr was a two-time AVCA All-American and a two-time All-Big Ten selection. She ranks second all-time in Wisconsin program history in career assists and is 19th all-time among Big Ten setters.

Kirr and her wife, Jordy Kirr, have two children, Jackson and Besser.