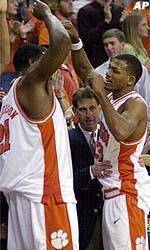 One hundred official size Rawlings basketballs will be decorated by each school and autographed by the head coach. The basketballs will be on display for auction starting Thursday, March 28, at the Atlanta Downtown Hilton through the following Monday, April 1, 2002. Participating coaches include those from the 65 teams participating in the tournament, plus coaches from the Southeastern Conference, Atlantic Coast Conference and from colleges in the state of Georgia.

“We’ve had a longstanding relationship with college basketball programs throughout the country and wanted to do something meaningful when the coaches hold their annual convention in our hometown,” said Jeffrey T. Dunn, president of Coca-Cola Americas.

“This is a very exciting program for our foundation, and we hope this proves to be the first of many successful fundraising activities for our foundation,” said Jim Haney, executive director of the NABC. “We are thankful for the participation of The Coca-Cola Company with our coaches as well as the long history Coke has of supporting our sport.”

The National Association of Basketball Coaches (NABC), located in Overland Park, Kan., was founded in 1927 by Phog Allen, the legendary University of Kansas basketball coach.

Formation of the NABC began as an emergency measure for the presentation of a united opinion the Joint Basketball Rules Committee, then the central governing authority of the game, announced without notice that it had adopted a change in the rules, which virtually eliminated the dribble. Allen, a student of basketball founder James Naismith, organized coaches to take a stand in a nationwide protest, which successfully postponed the adoption of the rule change for one year. It is worthy to note that the dribble still is part of the game of basketball. This marked the beginning of this collective group of coaches to serve as Guardians of the Game.

Since its inception, the NABC has contributed numerous ideas and programs to help preserve and enhance the positive aspects of college basketball. These initiatives include establishing the original Basketball Hall of Fame, creating the format for today’s NCAA Basketball Tournament, supporting Coaches vs. Cancer, and building the NABC National Basketball Center.