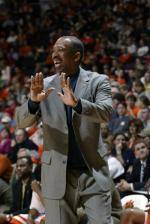 On N.C. State’s offense: “It just depends on how you play against it. Up there we had more problems with their running game than anything. We were a little taken off guard with them scoring so many points in transition. We talked about that Princeton offense, not a long time, because remember we had a short turn around on that game. So we can’t allow that to happen again. We can work and emphasize their transition game as well. We took a couple of days to prepare for that last year when we played them here. We just played a little differently. Maybe one of the reasons we had a problem with Georgetown, [was that] our young team couldn’t adjust just by talking about it. I think you’ve got to be out on the floor for a couple of days. We started that preparation yesterday. We’ll play it again today. We don’t get out in the lanes and deny their reversal like we do everybody else because when you’re out in the lanes, it makes you very susceptible to the back door. We had problems with Georgetown. The angles are so easy to get backdoors versus the way we play normally if that’s what you’re looking for. So we change it. We play head on so if somebody tries to go back door they have to go through our bodies. It usually takes a young player a couple of days to adjust to that because your habits have been formed all year long playing a different way. So that’s the way we choose to play against the Princeton offense, but N.C. State can get out and run. They’ve got some athletes and the real problem that I think you face with them is, as far as we’re concerned, is matching up with Julius Hodge. He’s a tough matchup problem. They’ve got other good players. They’re really good shooters and they’ve got some other players that are very crafty. Ilian Evtimov comes to mind. (Marcus) Melvin who hurt us last year, they’ve got a couple of other guys who are playing now, so now they’re deep and I’m sure Herb’s (Sendek) been wondering which team will show up. Sometimes this year they’ve been inconsistent, but when they’ve been on they’ve really been on. They’re lead by Julius Hodge who’s obviously a marvelous player.”

On the sense of urgency around the team: “The thing you have to keep in mind for our team, and I’m sure Herb (Sendek) is thinking the same thing, is we’re not at the half-way point yet. So somebody’s going to be playing great just like Maryland was last year going down the stretch. They’ve got a chance to do it and we’ve got a chance to do it. I think there was urgency for the last game, but anytime you’re 1-5 or 1-6 there’s urgency in the next game. We’re at home, so there is urgency. Being at home doesn’t guarantee anything. You’ve still got to go out and play and make things happen, it gives you a slight advantage being at home. I talked about, let’s get a win and get something going. There are examples all around our league and there will continue to be examples as the season goes on. You can look no further than Virginia Tech, they’ve got it going. You can look at some of the teams that everybody thought would be really good, they’re struggling. You can look at a lot of the scores, you can look at our scores and say let’s win this one and see if we can’t get something going. We’re looking for ways to look forward to the future and to look positively on what can happen. We’re not at the half-way point yet. There’s a lot of basketball left and we have been competitive, but you’ve got to get one to get something started.”