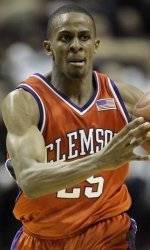 Cliff Hammonds, who helped lead Clemson to its best basketball season in years, has been selected as the South Carolina Athletic Hall of Fame’s Athlete of the Year presented by Piggly Wiggly.

The senior guard from Cairo, Ga., averaged 11. 4 points, 4.1 rebounds, 3.9 assists and 1.94 steals per game and sparked the Tigers to a 24-10 record and a No. 22 ranking in the final AP poll. Hammonds, a three-time Academic All-ACC performer and finalist for the Chip Hilton Basketball Hall of Fame Award for excellence on the court and for high character, broke four Tigers’ career records this season. He set marks for more games played (134), games started (133), consecutive starts (130) and minutes played (4,285).

Hammonds will receive the award May 19 at the SCAHOF Induction Ceremony and Banquet at the Columbia Metropolitan Convention Center. For tickets and more info, call 803-779-0905.

The banquet will feature the honoring of several award winners as well as the induction of the Class of 2008 which includes of Mike Dunleavy, Levon Kirkland, Bob Bolin, Ernie Jackson, Carl Williams, Dottie Pepper and Tom Price.

About 40 Palmetto State legends from the past covering some six decades will return for the blue jacket ceremony, making the affair the greatest and most wide-ranging assembly of sports stars in one gathering.