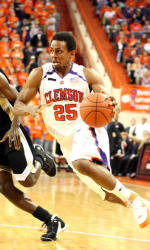 Clemson, SC – Cliff Hammonds was one of 10 players named to the All-District III team on Tuesday by the U.S. Basketball Writers Association (USBWA). Hammonds, who on Monday was named third-team All-ACC by the ACSMA, led the Tigers to a 22-8 record during the regular season and third-place finish at 10-6 in the ACC.

Hammonds was named to the team along with several notables from the ACC, including District Player-of-the-Year Tyler Hansbrough of North Carolina. Other players from the ACC named to the All-District team were Wayne Ellington (North Carolina), James Gist (Maryland), DeMarcus Nelson (Duke), Sean Singletary (Virginia), Kyle Singler (Duke), and Greivis Vasquez (Maryland).

The senior captain from Cairo, GA ranks second on Clemson’s team this season in scoring at 11.7 points per game. He ranks second in the ACC in assist-to-turnover ratio (2.33), third in steals per game (1.93), and seventh in assists per game (4.03). Hammonds received honorable mention for the ACC’s All-Defensive team as well Monday.

Hammonds is one of only five players in ACC history with at least 1,400 points, 400 rebounds, 400 assists, and 200 steals in a career. The senior from Cairo, GA ranks in the top 10 in Clemson history in games, starts, minutes played, three-point goals, steals, assists, and assist-to-turnover ratio. He has started a school record 126 consecutive games.