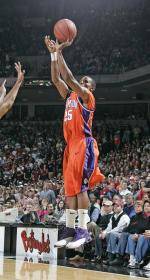 Clemson’s Cliff Hammonds was named ACC Men’s Basketball Co-Rookie of the Week after helping lead the Tigers to two victories last week. The freshman guard from Cairo, GA, was instrumental in the Tigers’ wins over Ohio State in the ACC-Big Ten Challenge and in Clemson’s overtime victory against in-state rival South Carolina. Hammonds is the first Tiger to earn Rookie of the Week honors since Chey Christie received the accolade during the 2001-02 season.

For the week, Hammonds was 11-16 (68.8) from the field, including 8-11 (72.7) from beyond the arc. He averaged 15.5 points and 3.5 assists per game, with 12 rebounds and three steals. Against Ohio State, he scored 14 points with six rebounds, four assists, two steals and one turnover in 31 minutes of play. Hammonds scored a career-high 17 points with six rebounds in 39 minutes of play against the Gamecocks.

The Tigers return to action on Saturday, Dec. 11 as they play host to Charleston Southern in a 7:00 PM game.