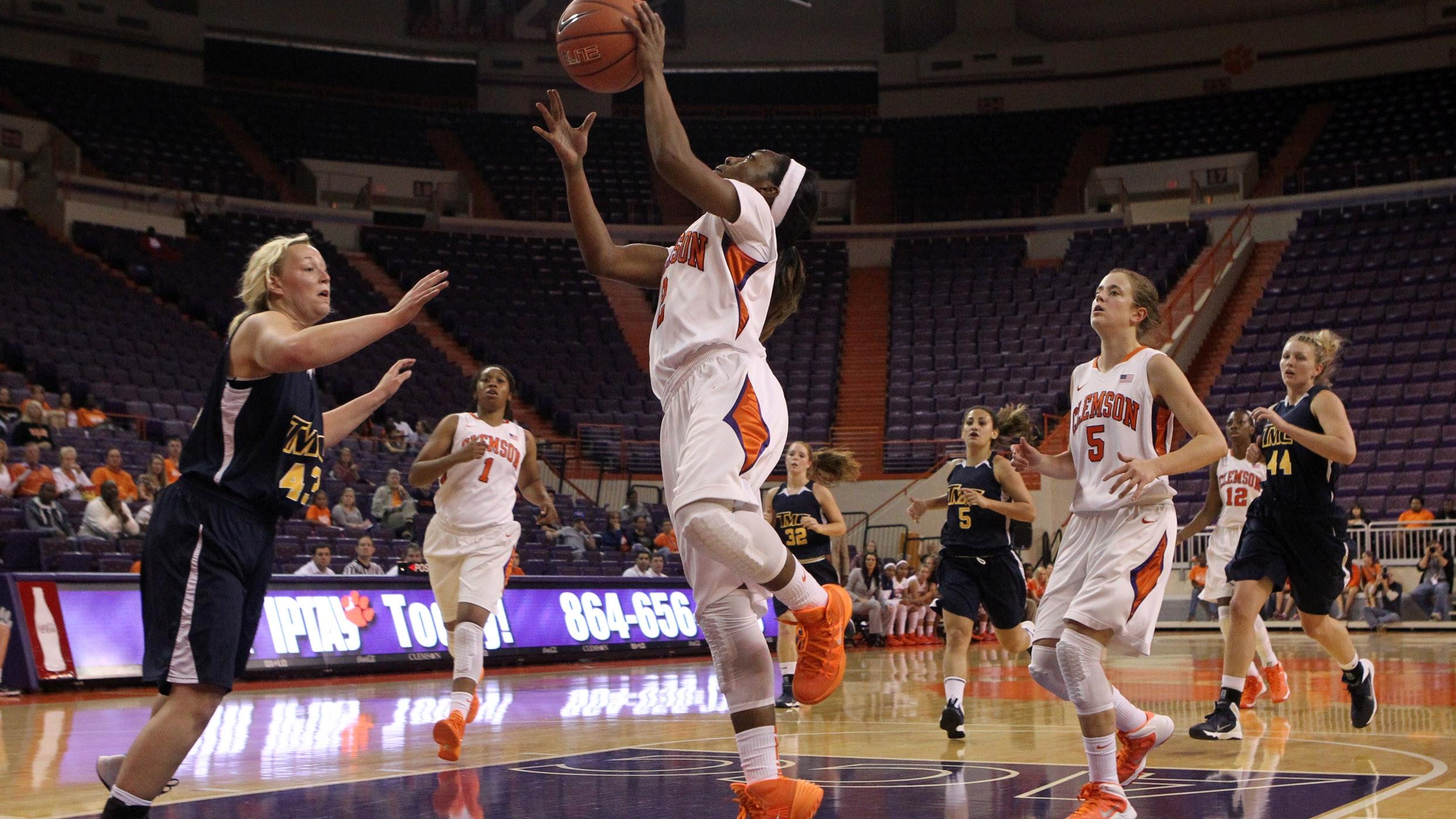 CLEMSON, SC – The Clemson women’s basketball team shot .565 from the field and hit 21-27 free throw attempts en route to a 95-48 win against Limestone College in a Sunday exhibition contest. The game served as Clemson’s final dress rehearsal before opening the season on Friday at 4:00 pm against Davidson in Littlejohn Coliseum.  Nikki Dixon scored 19 of 26 points in the second half and went 10-12 from the field, and senior Quinyotta Pettaway put up a monster, 21-point, 20-rebound effort against the Saints. The Tigers turned 17 Limestone turnovers into 33 points, and scored 56 points in the paint in the victory.  Point guard Chelsea Lindsay had 16 points, four assists, four rebounds and three steals in guiding the Clemson offense, which hit 35 of its 62 shot attempts, including .608 from inside the arc.  Charmaine Tay added 15 points, 7 rebounds, three assists and three steals, as well as a couple of acrobatic finishes around the basket.  Clemson used a 20-0 run over a seven minute stretch in the first half to pull away, holding the Saints to an 0-13 mark from the field and seven turnovers during the span.  Player of the Game: Quinyotta Pettaway – The senior scored 21 points on 9-16 shooting and had 20 rebounds and three blocks down low Stat of the Game: 33 Points off Turnovers – Although fewer than the 41 against Truett-McConnell on Tuesday, the Tigers’ 33 points of 17 turnovers represent an efficient conversion of Limestone’s mistakes. By contrast, the Saints scored just eight points off of 17 Clemson turnovers Head Coach Audra Smith Quotes: Overall thoughts: “I had to call some timeouts to get us back into it late in the game. We got a little complacent once we built a substantial lead. I talked to our team about offensive execution and making sure we were aggressive and alert defensively. Exhibition games are a measuring stick to determine where we are at the beginning of the season. I feel like we played hard, especially at the end, and we did a much better job of offensive execution and communicating on the defensive end. So, I’m pleased that we finished it up, but obviously we still have a lot of work to do.”  Practice schedule next week: “We will practice tomorrow [Monday], with the majority of practice focusing on film. We will break down the things we did very, very well tonight and some of the things we need to work on. Then we will practice for about an hour and 45 minutes to fine tune some things offensively, get some good shooting in, and get them loose. Tuesday we will take off. We will then play it by ear. I want to keep practices to no more than an hour and half  so I can keep them fresh. We have a long weekend ahead of us with a good Davidson team coming in Friday and then a solid Wofford team coming in on Sunday.“ On the offensive play first and second half: “The play in the second half, as opposed to the first, was better for us. We were much better at getting to the basket. Even late in the first half it was okay, because we were spreading them out and being more patient and finding holes to get to the basket. We did a good job of getting the ball inside.”