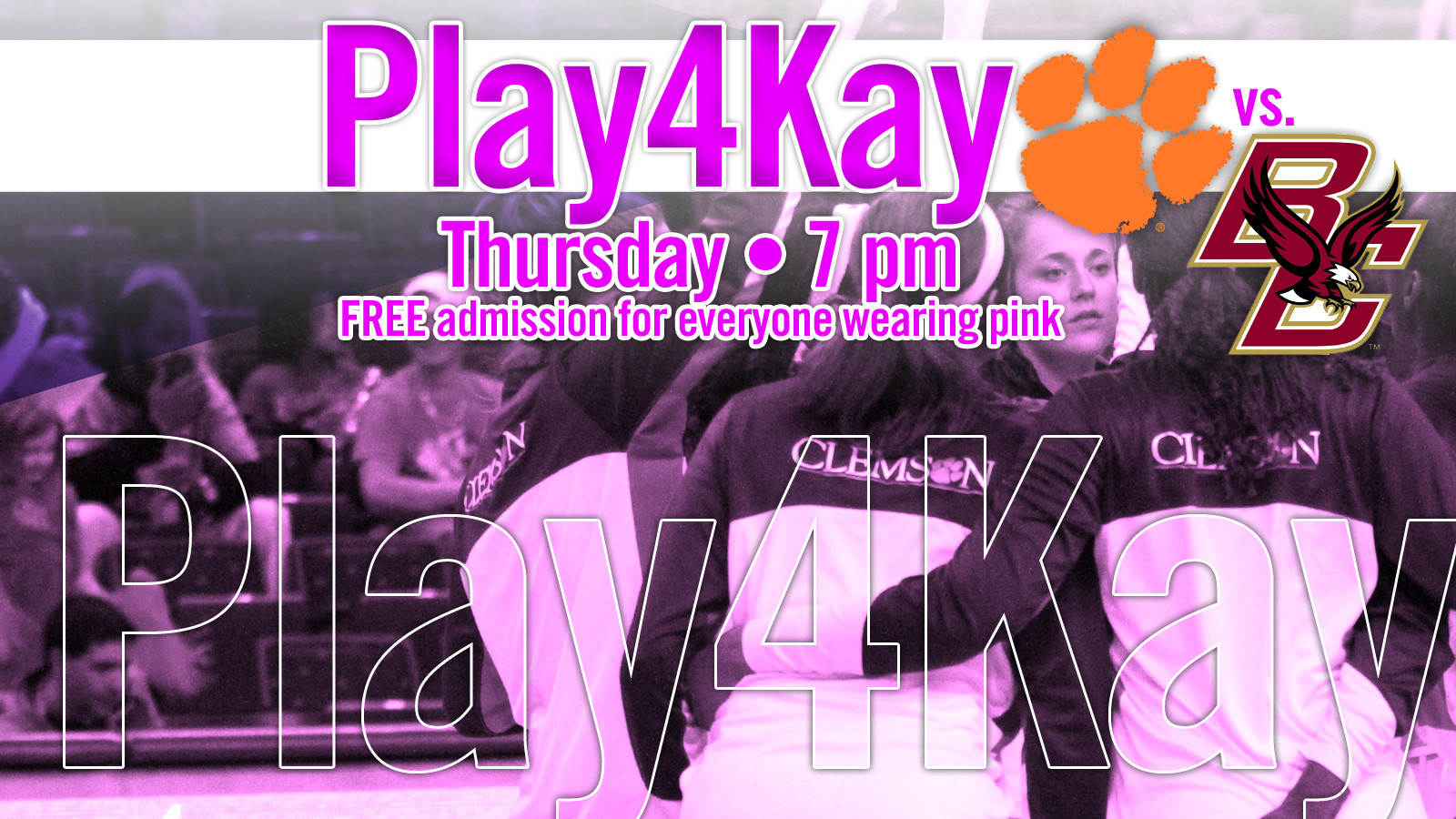 Game Information: Who: CLEMSON TIGERS (11-16, 3-10 ACC) vs. BOSTON COLLEGE EAGLES (12-15, 3-10 ACC) When: Thursday, Feb. 20 at 7 pm Where: Littlejohn Coliseum in Clemson, SC Watch: Tigercast Listen: Clemson Tiger Sports Network (Don Munson, Dory Kidd) and Clemson Tigers Official App Promotions: Fans wearing pink will receive free admission, and all other seats $3.  Next Game: Clemson vs. Florida State (Clemson, SC); Sun., Feb. 23, 2 pm CLEMSON, SC – The Clemson women’s basketball team will play its annual Play4Kay Pink Game against Boston College (12-15, 3-10 ACC) in Littlejohn Coliseum at 7 p.m. on Thursday. The Tigers (11-16, 3-10 ACC) are looking for a second straight win over the Eagles after upending BC in Chestnut Hill last season.   The contest will be broadcast on the Clemson Tiger Sports Network on the radio and will be available by live video for free on TigerCast. In-game updates are available on the program’s official Twitter and Instagram accounts. All fans wearing pink will receive free admission, and all other seats will be just $3.  Fans are encouraged to donate to help the squad reach its goal of $5,000, with all proceeds going to cancer research and the Kay Yow foundation. Yow was a Hall of Fame coach at NC State. The team is accepting game-related pledges, as well as one-time donations. Online donations can be made at http://www.play4kay.org/clemsontigerswbb The first 1,000 fans will receive pink foam fingers, courtesy of the Greenville Health System, and ZTA sorority will be on hand with pink ribbons. Fans also have the opportunity to win an autographed football, autographed basketball, and other items at the East gate. Additionally, one student will win an iPad.  If you would like to honor a friend or family member, we encourage you to submit a photo and brief description to promo@clemson.edu. The photos will run on the videoboard during pregame.  Clemson holds a 3-7 record in the series, and split last season with each team winning on the other’s home floor.  Notes (In 140 Characters or Less):