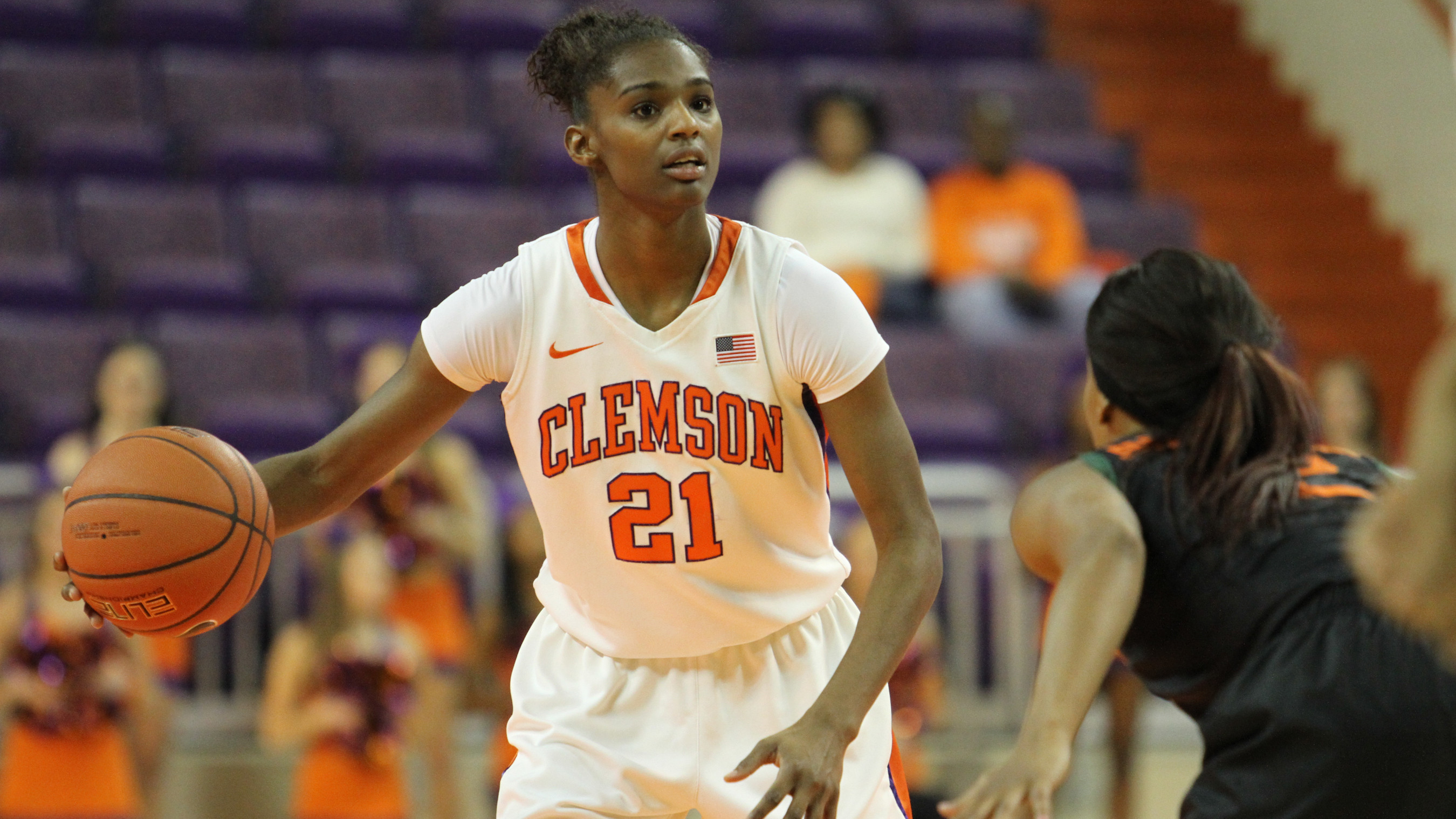 Final Score: Clemson 60, Miami 52 Records: CU: 10-11, 2-5 ACC; UM: 11-9, 3-4 ACC Clemson Leading Scorer: Nikki Dixon: 19 points Updated Series Record (trend): 6-7 [W1] Next Game: Clemson at Georgia Tech; Jan. 30; Atlanta, GA CLEMSON, SC – The Clemson Lady Tigers held Miami to a 1-for-28 mark from the floor during a 17-minute span to grab control of the game in a 60-52 victory over the Hurricanes on Sunday at Littlejohn Coliseum. Clemson (10-11, 2-5 ACC) held the Hurricanes (11-9, 3-4 ACC) to just 25.8 percent shooting from the field overall, including a 3-for-23 (13.0%) mark from three. Nikki Dixon recorded 19 points to lead the Tigers in scoring, coming up just four points shy of her 1,000th. The junior wing has scored 19 or more points in eight of the last nine games, and is averaging 20.0 ppg over her first seven ACC games. Quinyotta Pettaway recorded her second double-double of the season with 11 points and 12 rebounds, and also added the 100th blocked shot of her career.  Clemson held a 22-19 lead with a minute to play in the first half before going on a 13-5 run spanning halftime in taking a 12-point advantage. The Canes cut the lead to eight with 6:29 to play on a three-pointer by Adrienne Motley, who finished with 14 points. However, Nixon buried her only three-point attempt of the game in immediate response to again give Clemson a cushion.  Defensively, the Tigers held Miami to its lowest field goal percentage of the season. It was also the lowest field percentage against the Tigers by an ACC team this season. Overall, Clemson snapped a four-game skid against the Hurricanes, as Clemson’s last win came on Feb. 18, 2010. Clemson is now 6-7 all-time against Miami, and 2-4 in Littlejohn Coliseum.  In the first half, Miami hit just 6-of-28 field goals for a mark of 21.4 percent. That is tied for the 10th lowest field goal percentage by an opponent in a single half.  Clemson will return to action on Thursday at Georgia Tech at 7 p.m. in McCamish Pavilion, and will play at Virginia on Sunday at 2 p.m. Player of the Game: Quinyotta Pettaway – The senior post player recorded her second double-double of the season, and added her 100th career block in the contest Stat of the Game: 1-28: During a 17 minute span from 6:03 in the first half to 10:28 in the second half, Clemson held Miami to .036 shooting Individual Notes:

Audra Smith Quotes: “I’m really proud of these girls. They stuck together, stuck to the game plan and they were ferocious defensively. They switched to help each other out, they rebounded, and even though they outrebounded us, we limited their scoring opportunities. The whole plan was to not worry about our offense and what we run because we know we can score, we just have to defend. We held them to 52 points and that was great. The whole point of our gameplan was to make Miami work for everything and I felt like we accomplished that.” [<a href=”//storify.com/ClemsonTigers/clemson-vs-miami-jan-26-2014″ mce_href=”//storify.com/ClemsonTigers/clemson-vs-miami-jan-26-2014″ target=”_blank”>View the story “Clemson vs. Miami (Jan. 26, 2014)” on Storify</a>]