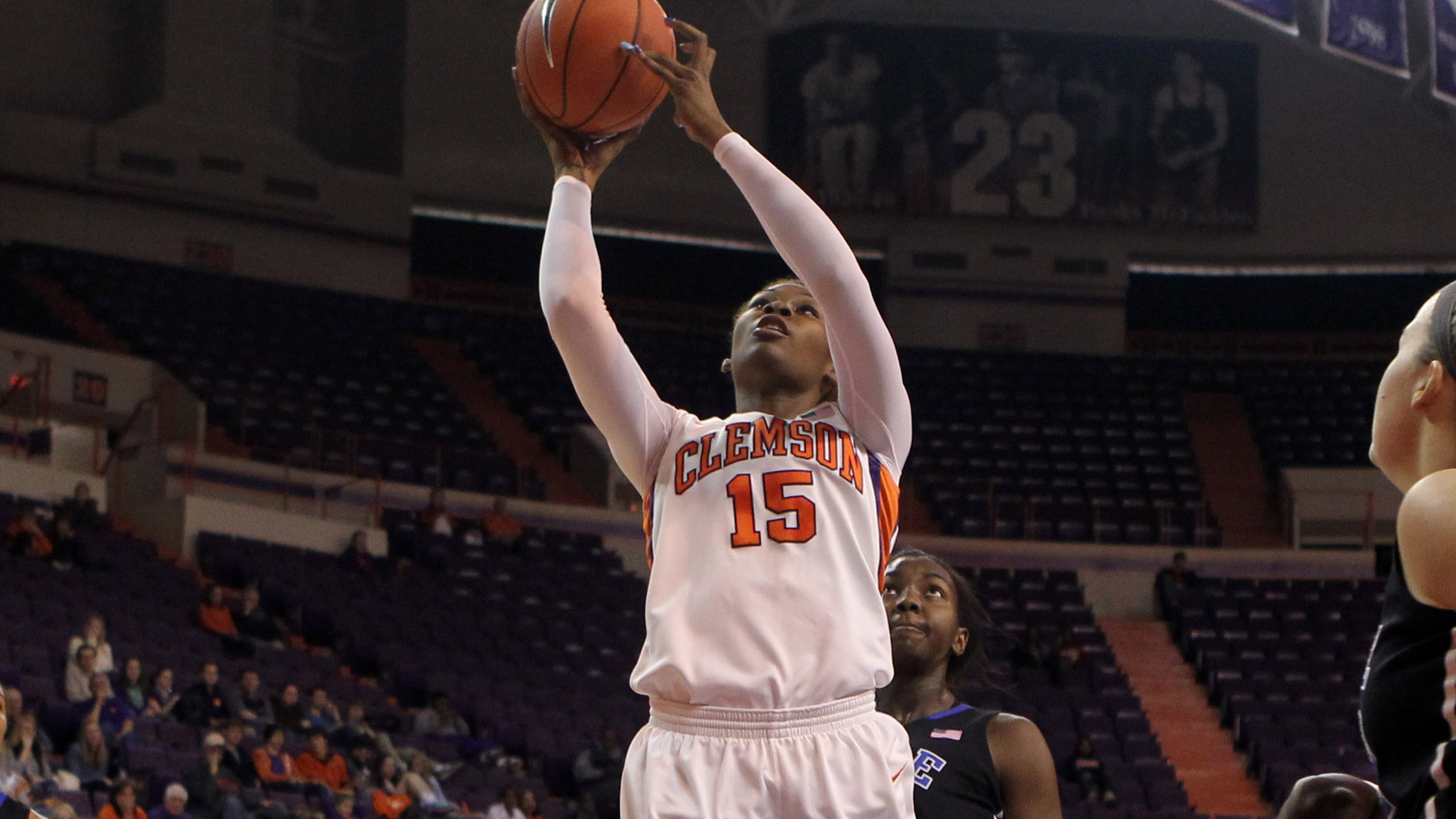 CLEMSON, SC – The Clemson women’s basketball team (11-13, 3-7 ACC) fell to 5th-ranked Duke (22-2, 9-1 ACC), 78-51, on Thursday after a strong second-half performance from the Blue Devils. Duke outscored the Tigers 50-28 in the second half after the Tigers trailed by just five at halftime.  Nikki Dixon, who received a ball before the game commemorating her 1,000th career point,  scored 10 points for her 15th double-figure point game this season and added a game-high seven assists. Quinyotta Pettaway also contributed 10 points with four rebounds, two assists and two steals. The Tigers battled in the first half and led by one with 4:26 remaining in the half, before Duke went on a 26-6 run over the next 11 minutes to put the game out of reach.  Clemson had hung around the the first half thanks to 15 first-half turnovers from the Blue Devils, who average 17.0 per game coming in. The Tigers shook off an early 11-2 deficit to take a 19-18 lead in capitalizing off of Duke’s miscues, and had the Blue Devils to four of their first 13 from the floor before hitting their final seven shots of the frame.  Sophomore post player Nyilah Jamison-Myers had nine points on 4-6 shooting, while Kelly Gramlich had nine points off the bench on three three-pointers, leaving her with 52 on the season. Clemson fell to 32-39 in the series overall, the last 18 meetings of which have gone to the Blue Devils, who have been ranked in the top ten in 16 of the contests.  The schedule gets no lighter for Clemson, who travels to No. 9/10 Maryland (18-4, 6-3 ACC) on Sunday at 2 p.m. in College Park.  Player of the Game: Nikki Dixon – The junior wing moved into 20th in school history in scoring with ten points, and added seven assists, four rebounds, and two steals in 35 minutes Stat of the Game: 21 – Clemson forced 21 Duke turnovers and scored 21 points off those miscues; It was Duke’s 3rd-highest turnover total of the season Team Notes

Audra Smith Quotes “I felt like we competed and played hard in the first half and I feel like in the second half, Duke stepped up their game.  They started to compete harder and we did not match their level of intensity.” “We did a really good job of trapping in the post.  They weren’t able to throw the ball up to the top to the open shooters, but unfortunately we did not slide into the paint and allowed their high post player to dive down in the paint.” [&lt;a href=”//storify.com/ClemsonTigers/clemson-v-duke-2-6-14″ mce_href=”//storify.com/ClemsonTigers/clemson-v-duke-2-6-14″ target=”_blank”&gt;View the story “Clemson v. #5 Duke (2-6-14)” on Storify&lt;/a&gt;]