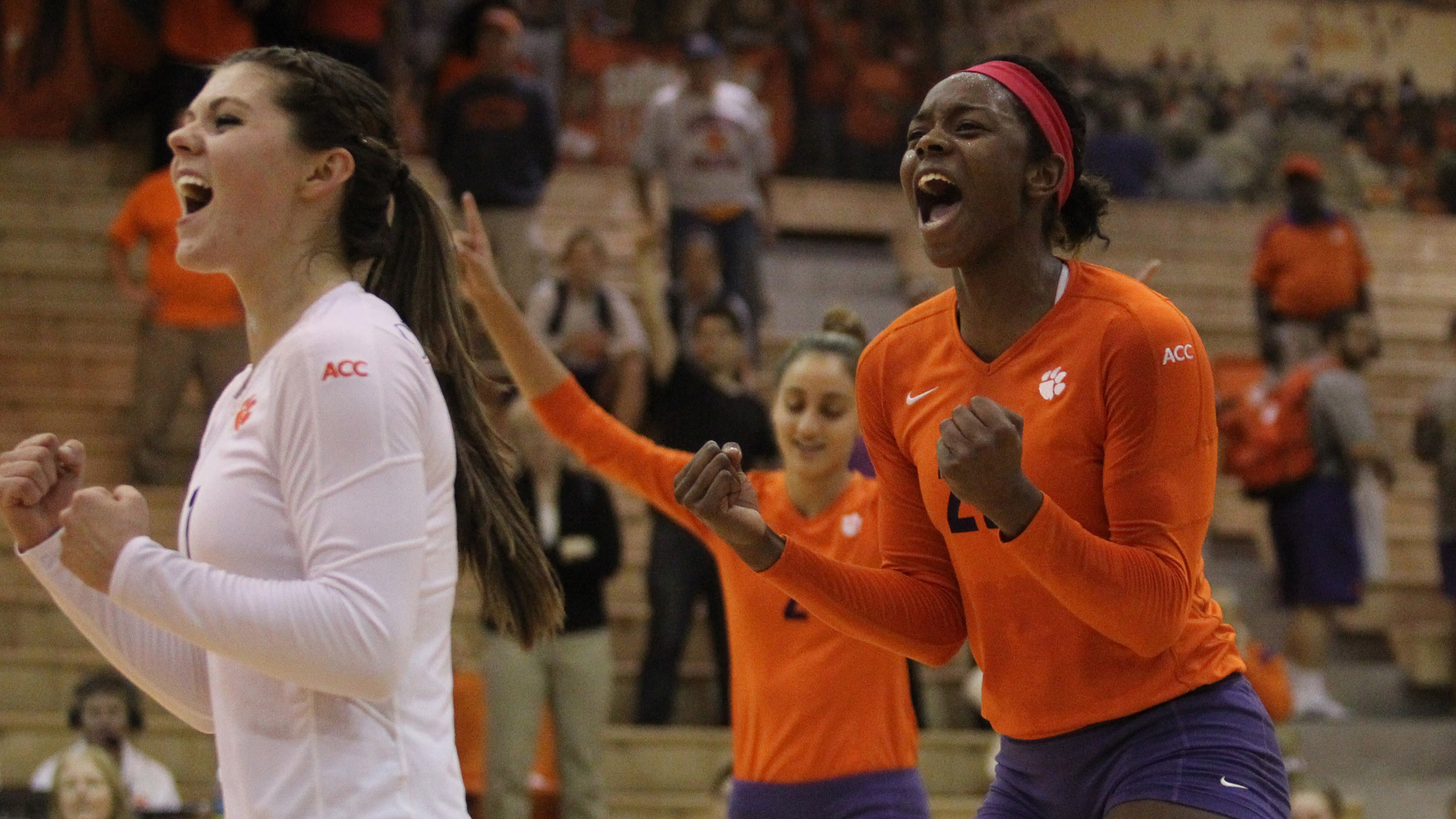 CLEMSON, SC – The Clemson volleyball team overcame an early deficit in the fifth set to top Virginia Tech, 3-2 (25-17, 21-25, 25-23, 19-25, 15-12), on Friday night in Jervey Gym. The Tiger (12-10, 6-5 ACC) defense held the Hokies (18-7, 6-5 ACC) to .173 hitting and registered 13.0 blocks, including three in the decisive fifth set.  “This was a real battle for both sides – a great match,” said Head Coach Jolene Jordan Hoover. “Of course, it’s nice to come out on the winning end of it. I think getting that first set in our pocket helped us the rest of the match, and of course taking the third, which could have gone either way. ” The match featured twenty-nine tie scores and 15 lead changes, with none tighter than the third set. Clemson shook off a 19-17 deficit, scoring four straight points to take the crucial set.  The Tigers will now prepare for a Saturday match against Virginia in Jervey at 6:00 pm. The Cavaliers topped Georgia Tech in five sets on Friday night, upping their record to 13-10 and 6-5 in league play, tied with Clemson.  “Virginia recently beat Virginia Tech, so we knew we’re going to have our hands full this weekend,” said Hoover on Saturday’s opponent. “I like the way we stayed in system and were steady, and didn’t give away too many points tonight. Virginia has a couple of great outside hitters, so it should really be a tough match for us.” Clemson battled throughout the night on Friday, getting 18 kills and 16 digs from Mo Simmons, and a career-high-tying 14 kills from freshman Leah Perri, on an otherwise slow offensive night. Senior setter Hannah Brenner finished a kills shy of her second triple-double, as she tallied nine kills, 39 assists, 14 digs, and four blocks.  Perhaps the most impressive performance came from libero Niki Collier. The junior registered career-highs in digs (22) and assists (9), while also going a perfect 20-for-20 in serve receive and tallying two aces and no errors in a team-high 22 serves.  “She did a really good job tonight and has been really stable for us once she has moved into this role, and did a nice job again tonight,” said Hoover.  Collier’s success in serve receive was indicative of how the Tigers played, as Clemson surrendered just two aces in 102 Tech serves, a team success rate of .952. This allowed Clemson to set up the offense to the tune of 60 kills, 31 of which came in sets three and four.  The Tigers improved to 15-8 in the all-time series with the Hokies, and have now won three in a row, dating to 2011. The Tigers have just three home matches left to play in their final nine outings, beginning Saturday.