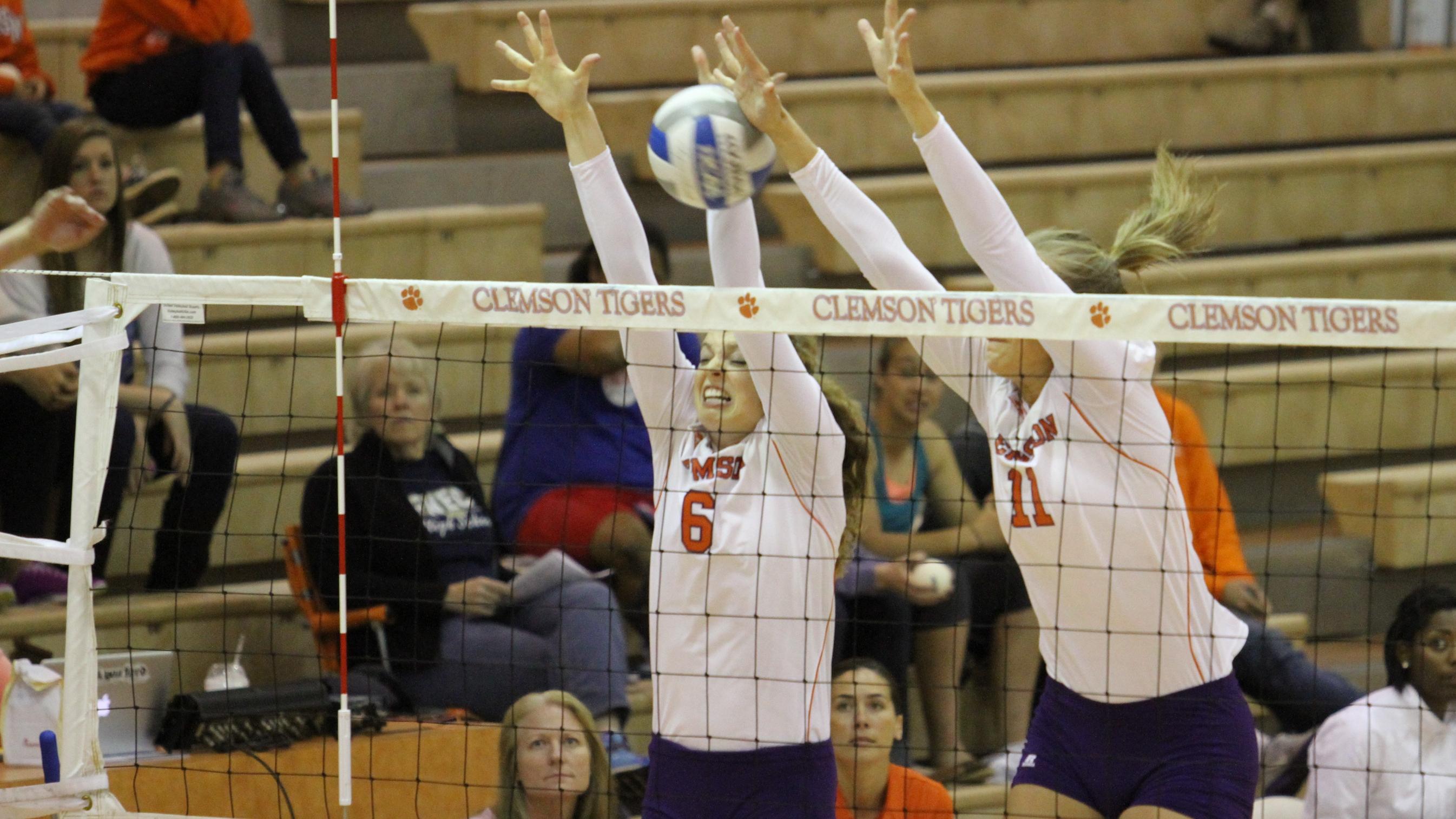 CLEMSON, SC – Both the Clemson and Virginia volleyball teams won their respective Friday matches in five sets. When the two faced off and went to five on Saturday, something had to give, and it was the Cavaliers (14-10, 7-5 ACC) who emerged victorious (18-25, 25-19, 21-25, 25-21, 15-12) in Jervey Gym over the Tigers (12-11, 6-6 ACC).  Clemson took the first and third sets as it did on Friday, but dropped the fifth to snap a four-match winning streak over the Cavaliers and fall to 4-3 in five-setters this season.  Against the Hokies on Friday, Clemson fell behind, 5-3, in the fifth set, but came back to seal the victory with a 15-12 win in the final set. On Saturday, after falling behind 4-1, Clemson tied it at 4-4, but Virginia scored five straight points to give it just enough cushion to hold of the Tigers. The Tigers cut it to one, 13-12, on Mo Simmons’ 21st kill, but the Cavs were able to close with back-to-back kills.  Simmons’ 21 kills led all players, as did her 53 attacks. During the match, she passed Lori Ashton (2001-04) for tenth on Clemson’s all-time list for most attempts. Ashton had 3,472 during her career, while Simmons now stands at 3,511, just 26 behind Hall-of-Famer Denise Murphy for ninth.  Freshman Leah Perri tied a career-best with 14 kills for the second straight night, hitting .367 on Saturday, moving her into the team lead for hitting percentage at .289 on the year. However, no other Tiger was able to amass more than eight kills, while Virginia had four players with 12 or more kills, led by 19 from Haley Kole.  Virginia aggressive serve kept the Tigers off-balance much of the night, as Clemson allowed eight aces in 104 Cavalier serves, after allowing just two on Friday in 102 serves against the Hokies. After posting an impressive 17 kills and .455 hitting set in the first, a 25-18 Tiger win, Clemson’s hitting percentage decreased each subsequent set.  Clemson hit into three Virginia blocks in the fifth set, which stunted the ability to string together points. Clemson had 10.0 rejections, but Virginia had 11.0.  Outside hitter Kristin Faust had 19 digs to lead the Tigers defensively, while Niki Collier had 17. Simmons also posted 11 for her tenth double-double in 12 ACC matches.  The Tigers will play six of its final eight on the road, beginning this week. Clemson will play NC State on Thursday at 7:00 pm in Raleigh and North Carolina at 8:00 pm on Friday night.