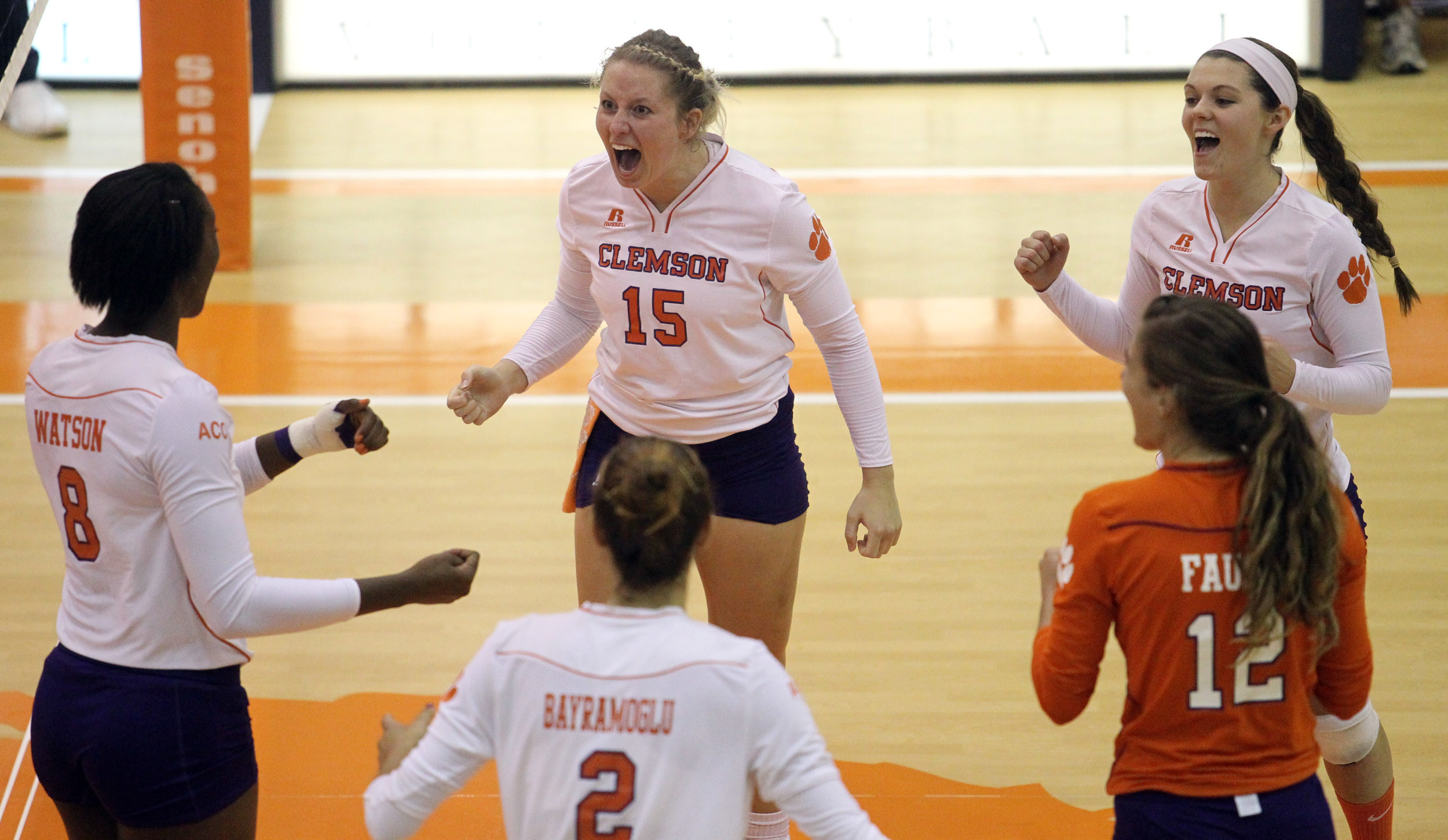 @ClemsonVB Comes Back to Stun Wake Forest in Five

CLEMSON, SC – The Clemson Volleyball team shook off a two-sets-to-none deficit and stormed back for a 3-2 (17-25, 17-25, 25-23, 25-13, 15-7) win over Wake Forest on Friday night in Jervey Gym. It was the third straight win for the Tigers (10-8, 4-3 ACC) overall and fifth in a row in the series over Wake Forest (12-7, 1-6 ACC).   After two tremendous offensive nights in the previous two wins over Georgia Tech and Notre Dame, the Tigers got defensive on Friday night. The Tigers tallied 16.0 blocks, including seven in the deciding fifth set, and held the Demon Deacons to only ten kills over the final two sets.  They were also able to side out on 17 of 20 Wake Forest serves in the final two sets. Offensively, Clemson got over a slow start to hit .278 or better in each of the final three sets, including a season-best .500 in the fourth set.   Reigning ACC Player of the Week Mo Simmons matched a career-high with 25 kills and hit .333 in the match. Simmons continues to impress and make a case as the conference player of the year. In addition to her league-best 4.63 kills and 5.03 points per set, she has a double-double in every league match so far this season.   Alex Lynch had a career-best seven total blocks, while Beta Dumancic had eight. Dumancic entered the match second in the ACC at 1.30 per set. Kristin Faust and Irem Bayramoglu each had 15 digs to lead the Tigers, while libero Niki Collier had 14.    Reigning ACC Freshman of the Week Leah Perri continued her strong play with 11 kills and .318 hitting to go with three blocks on the night.   Faust also added 11 kills, giving her a fourth double-double on the season. The Tigers will now turn their attention to No. 24 Duke on Sunday at 1:00 pm in Jervey Gym in the Dig Pink match.   The Demon Deacons Started off strong offensively, hitting .317 and .289 in the first two sets en route to decisive 25-17 wins in each of the first two frames.   However, Jolene Hoover’s team came out of intermission with a new-found purpose. The Tigers’ passing improved dramatically, and Simmons caught fire. Over the final three sets, she had 15 kills against just one error in 27 swings.  After just three blocks in the first two sets, Clemson had 13 in the final three sets.  The Tigers will now turn their attention to No. 24 Duke, who comes to town on Sunday at 1:00 pm in the annual Dig Pink match. The Tigers have played five straight matches at home, and will head to Boston College and Syracuse next week.