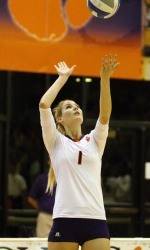 CLEMSON, SC – Clemson volleyball coach Jolene Hoover knew that her team’s home matches between Boston College and Maryland this weekend were extremely important to the Tigers’ season. With some difficult road trips looming, she realized that taking care of business at home would be vital to her team’s conference success this season.

In such situations, it is common for a coach and a team to look to its best player or a core of its best players. Luckily for Hoover, there is a large enough group of stud student-athletes that finding one is not an issue.

On this particular weekend, when the Tigers trailed after a set against the Eagles and when they were locked in a tight five-set battle against the Terrapins, Hoover turned to junior Serenat Yaz.

“This weekend, I think we did a really good job,” she said. “We are ready now for tough teams in Miami and Florida State next week. It’s going to be harder and we need to handle them. It’s good to win two matches at home.”

Yaz played a major role in a pair of Clemson victories over the weekend, and seeing her on the court in key situations has become commonplace over the past two seasons. She led her team in scoring in both matches, averaging 21 points per game, and time and time again, her number was called in critical situations down the stretch of both matches.

“She’s just such an even-keel, steady player, and she’s very smart,” Hoover said. “She sees the block well, so she can hit a variety of shots depending upon what the block is taking. She tries to go for what they’re giving her. As the match goes on, she gets better and we start finding her.”

“The connection between the setter and me was perfect,” Yaz said. “It was tough because we’ve been playing five sets a lot the last few matches. It was good to play well.”

The native of Istanbul, Turkey came into her own last season, when a young squad was turning to inexperienced but talented players to carry the load. Now that Yaz knows the difficulty of competing in the ACC on a consistent basis, she has become a leader by example for the Tigers.

“My teammates have been pushing me so hard,” she said. “I’m trying to do everything for them, so that’s helping me out on the court.”

The journey toward becoming a team leader has not been without frustration. At times, Yaz admits that doing the little things–like passing and defending–have not been a priority for her. There were signs over the weekend, such as a nine-dig performance against Maryland, that her mentality may be changing.

“I concentrated on the game because I know that if I can hit it, somebody can finish,” Yaz said. “I didn’t think about getting the points. I just did my job.”

Now with a plethora of difficult challenges ahead in the latter portion of conference play, Yaz feels she is putting it together as well as she can at the right time.

“I’m playing what I see on the court,” Yaz said of her most recent performances. Sometimes it’s different when we watch film before the game, so I’m trying to see what the other team is doing during the game.”