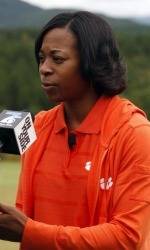 SUNSET, SC – Itoro Coleman cannot wait to get on the basketball court, and she has good reason.

With a freshman class that ranked 30th in the nation about to start their careers, plus a core group of players that have weathered some tough storms the last two seasons, the energy within the women’s basketball program at Clemson is changing, and it is changing for the good.

“I just like the energy of this group,” the Lady Tigers’ second-year head coach said Wednesday from the Reserve at Lake Keowee in Sunset, SC. “They come in and compete. Our defense is ahead of our offense right now, which is great. As a coach, this time of the year, that’s what you want.

“But, I mainly just like our energy. Now, we are young, but I’m mainly looking for consistency from this team. But, going through my first year taught me a lot. Obviously, I wanted to do better, but if you look at the grand scheme of things we got better. It did not reflect with our record, but from a competing standpoint we were in a lot of games last year, but we could not pull it out at the end.”

Despite that, Coleman is encouraged with the prospects that lay ahead for the 2011-’12 season. She returns just one starter in senior center Kelia Shelton, guard Chanice Dunn and guard Quinyotta Pettaway.

“I’m encouraged coming into this season,” she said. “Obviously, we have five freshmen, three sophomores and two seniors so we are fairly young, but from a competing standpoint, we are right where we want to be.”

A lot of the Lady Tigers success this season will come by the way of their freshman class, which consists of guard Nikki Dixon, guard Natiece Ford, guard Kelly Gramlich, forward Deja Hawkins and guard Chelsea Lindsay. Coleman is looking forward to the continuity this class will bring to the women’s basketball program for years to come.

“That goes back to consistency,” the second-year head coach said. “Right now, there have been different players stepping up. I just need the same player to step up the whole time, but that happens with a young team so I’m just going to have to be patient.

“I want us to definitely start peeking at some point, but right now we are right where we need to be.”

Clemson’s leadership is also where it needs to be as the Lady Tigers get set to open the season on Nov. 5 against St. Augustines at Littlejohn Coliseum. As the lone seniors, Clemson will be expecting a lot from Mason and Pauldo.

“They have been through it for three years so obviously, they want to experience something a little bit different in their senior year,” Coleman said. “They have been very vocal and I know a lot of our young kids are looking up to them.

“I expect a better year from both them. Pauldo is the leading returning scorer from last year. She has had a great summer and she has come back in better shape. She has lost 25 to 30 pounds and she is moving really well on the court. You can tell she wants it.

“You can say the same thing with Lindsey. They are playing with a different kind of passion, and I think part of it is this is their last year. They want to give everything they have to give.”