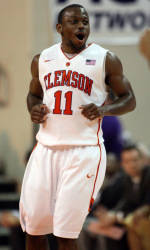 ClemsonTigers.com Exclusive: Time for Tigers to get Defensive as Wake Comes to Town

CLEMSON — From a defensive standpoint, the Clemson Tigers face one of their biggest challenges Saturday when they host the Wake Forest Demon Deacons in a pivotal ACC contest at Littlejohn Coliseum at noon.

The Deacons (11-9, 2-4 ACC) have a formidable backcourt in the ACC in C.J. Harris, Travis McKie and Tony Chennault.

“They are really aggressive,” Clemson guard Andre Young said. “They play to their strengths. C.J. Harris can shoot the ball really well and he has a nice pump fake. Travis McKie can finish down low too. They are just really good players and they are really talented.

“We are going to have to do a good job on those guys.”

“Those guys are playing well,” Clemson Head Coach Brad Brownell said. “The wild card guy, though, is (Nikita) Mescheriakov. I think he is talented, long, athletic and can make the three. He is really a great driver of the ball. He is a guy we have to be careful with.

“Obviously, McKie and Harris are their leading scorers and McKie is a very good player both in and out. He can post a lot and can step out and make the three. Harris is a third-year guy that has been playing a while and has been a good player for a couple of years now. He really scores it and really knows how to get to the free throw line. They have a good group.”

It’s a group that is good enough to come in and give the Tigers a serious challenge. Last year, Clemson (10-9, 2-3) had little problem with the Demon Deacons in a 63-49 victory. But Wake Forest is much improved this year, and Brownell expects things will be much tougher on Saturday.

“A lot of that is because their players are older,” he said. “They are playing with a lot of the same guys, but those guys were freshman and sophomores last year and a lot of them have more experience. Harris and McKie are two guys that are averaging 17 a game and can really score. They are sophomores and juniors now, and I think they are much more comfortable in Coach (Jeff) Bzdelik’s system.

“He has done a good job flushing out some issues he had with his team when he got the job and finding the guys that really want to be there for the right reasons. I think their team is more together and understands more of what he wants.”

The Tigers are hopeful they are more aware of what they have to do in order to finish strong and compete again for another berth in the NCAA Tournament. Clemson is coming off a 64-62 victory over Georgia Tech, in which Young scored a career-high 29 points and had a career-best seven three-pointers.

Clemson has had the last week off, though, after playing three games in six days prior to the Tech game.

“We feel pretty good,” said Young, who leads the Tigers with 13.6 points per game. “We let the win sink in a little bit and we played fairly well against Georgia Tech, but now we have a game tomorrow and we will be prepared against Wake Forest.

“It is important that we come into this game with a good defensive minded focus and try to get this one.”