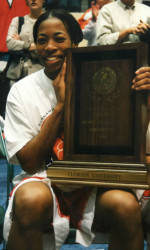 GREENSBORO, NC – Nikki Dixon was enamored with the makeup the ACC Network put on Itoro Coleman before the Clemson head coach did her exclusive interview Wednesday afternoon at the Greensboro Coliseum.

“Are you wearing blush?” Dixon asked just before the two boarded the bus to head to Konnoak Elementary School for a community service project. “You look real nice. I have never seen you like this.”

Dixon and most of the players on Clemson’s women’s basketball team have not seen Coleman play either. An All-ACC performer, Coleman was one of the best point guards in the ACC when she led the Lady Tigers to ACC Tournament Titles in 1996 and 1999, while advancing to the finals in both 1997 and 1998.

Like the makeup she wore Wednesday, Coleman beautified Clemson basketball in the late 1990s. During her playing days she guided the Lady Tigers to 93 wins and four NCAA Tournament appearances, while posting a 10-2 record in the ACC Tournament. Her fondest memories occurred in the same tournament her Lady Tigers will be playing in Thursday (11 a.m.) when Clemson takes on No. 5 seed North Carolina in the first game of the 2012 ACC Tournament.

“I remember my freshman year and the seniors being extremely excited,” Coleman said. “Coach (Jim) Davis was always talking about it being a new season and it doesn’t matter right now where we finished. All that matters is what we do on the court right now.

“There was so much excitement built around the tournament. It was a dog fight like it is now. I was just so pumped up, but I didn’t understand why. So when we won it, I was like, `Yeah, we are supposed to win. What’s the big deal?’ Well fast forward to my senior year, and I cried after we won the championship that day. I understood what it meant to win it. I understood what it meant going to bat for my teammates every day. We always had to prove people wrong.”

Now fast forward to the present and senior Shaniqua Pauldo is in the same place her head coach was in back in 1999.  After bursting on the scene in the 2009 ACC Tournament, when she scored 23 points on 11 of 18 shooting in an 81-69 victory over Georgia Tech, Pauldo is now one of three seniors on the 2012 squad, who will be trying to extend their careers with each game.

Like Coleman in 1996, Dixon isn’t too sure what to expect when she suits up against the Tar Heels.

“When I first walked into the gym, I took a deep breath. I turned around and told a few of my teammates that I’m nervous,” the freshman said. “They told me not to worry about it. They said it is just another game and I need to go play for the team.

“But the arena, the atmosphere and there are people watching our practices, it is bigger than a regular season game. I don’t know how to explain it. It is like way bigger, and my adrenaline is rushing. So I’m kind of nervous and I’m trying to stay focused and remain consistent. It’s a huge deal to be here, though.”

Though it might seem crazy to think, it might be a blessing the Lady Tigers are playing North Carolina in the first round. Clemson beat the then-21st-ranked Tar Heels 52-47 in Chapel Hill, NC on Jan. 12, Clemson’s first win over a ranked team since 2003. The 47 points were the lowest the Heels have been held to at home in its storied history.

“It does help us,” said Coleman, who was 2-2 against the Tar Heels in the ACC Tournament as a player. “We had a lot of confidence in that game and we executed our game plan. In that game we out rebounded them and we held them to 47 points, which was huge. They only had eight fastbreak points.

“We stuck to the game plan and the girls bought into it. I talk to our team all the time. We just want to be in a position at the end of the game to win, and that’s what we were able to do.”

And if the Lady Tigers to do it again on Thursday, it could possibly start a route to the championship game that will be a lot different from the one Coleman took in her playing days.

“That’s the excitement around tournament time because it is a new season.”