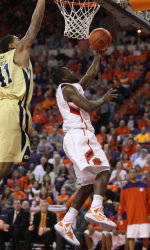 ClemsonTigers.com Exclusive: Tigers Look for the Lights in Atlanta

CLEMSON — When he brings his Clemson Tigers into Philips Arena on Tuesday to play ACC rival Georgia Tech, Brad Brownell will be in search of the power box before he does anything else.

When Clemson (13-13, 5-7 ACC) played host to the Yellow Jackets on Jan. 21, the power went off inside Littlejohn Coliseum, causing a 23-minute delay. When the lights came back on, Andre Young made seemingly everything, scoring 15 straight points after the delay as the Tigers jumped out to a 15-point halftime lead.

“We didn’t shoot the ball very well until the power went off,” Brownell told the media Monday afternoon. “We need to figure a way to shut the power off at Philips Arena sometime during the game.”

Young went on to score a career-high 29 points once the power returned, while leading Clemson to a 64-62 victory.

“I don’t know what it was,” said Young, who leads Clemson in scoring this year with 13.5 points per game. “I was just making shots, and at the same time guys were really finding me and setting good screens for me. It was my job to knock them down, and I did the best I could.”

His best was a 9-for-12 night, including a 7-for-9 game from behind the arc. Brownell expects to see Georgia Tech defenders guarding his senior point guard a lot tighter this time around, but he doesn’t expect them to do anything out of the ordinary defensively in doing it.

“When your guys see themselves getting scored on, their antennas are up even more. I think it will be more of that, rather than a different strategy.”

Young expects Georgia Tech (9-17, 2-10) to take away a few of his shots, but he doesn’t expect any kind of “junk” defenses. He expects more of what he saw at North Carolina last Saturday, when the Tar Heels made a point to have someone in his face all afternoon.

The Yellow Jackets have been adapting to not having Glen Rice, Jr., who will miss his second straight game after being suspended indefinitely by Head Coach Brian Gregory last Friday. Rice is Tech’s leading scorer, and scored in double digits in each of the three games prior to his suspension.

But, the Yellow Jackets held their own at Virginia Tech last Saturday, forcing overtime before falling to the Hokies on a last-second shot.

“If it wasn’t for a late mistake, they would have won the game,” Brownell said. “They moved the ball better and seemed to have good freedom and pace to their offense.

“Guys played very confident and played with poise. Brandon Reed and Jason Morris, those guys are probably going to get more opportunities in the backcourt. Mfon Udofia will get a few more shots. (Kammeon) Holsey and (Daniel) Miller, those guys will get a few more touches now. Will they have a guy to go to at the end of the game? I don’t know, but they didn’t seem to have that problem at Virginia Tech.”

If that is the case, maybe Brownell will have to find that power switch after all.