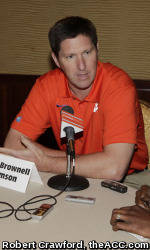 CHARLOTTE, NC – Clemson Head Coach Andre Young his most consistent player. However, he doesn’t expect his 5-foot-9, 170-pound guard to be his best defensive player. And there lies the challenge the Clemson Tigers are facing heading into the 2011-12 basketball season.

Though Demontez Stitt finished his Clemson career as one of the Tigers’ all-time greats, he was more known for his work on the defensive end of the floor than anything else. He finished his career with 164 steals and was a big reason the Tigers were always among the ACC’s top defensive teams.

“With (Stitt) being our defensive stopper on the perimeter, we need somebody to be able to do that,” Brownell said Wednesday as part of ACC Operation Basketball at the Ritz-Carlton in Charlotte, NC. “Andre is not built for that, and Tanner (Smith) needs to try to incorporate that. Bryan (Narcisse) can do some of that as well.”

Due to Stitt’s graduation, that burden falls on the shoulders of freshmen K.J. McDaniels and T.J. Sapp.

“We have to find a guard that can defend really good players, and one of those three guys is going to have to be the guy,” Brownell said. “They all have different things they do well. T.J. may be able to do it, and Rod can do some jamming in the backcourt, much like you saw from our point guard position last season like Andre and Zavier Anderson used to do a lot.”

Sapp is probably the best lateral defensive player of the young group, in terms of being able to defend different types of guards moving well. Hall has proven he has a very good chance to be a backup point guard to Young.

“Rod is strong with the ball and has a big body,” Brownell said. “He has good poise with the pass, too.”

McDaniels has improved his shot and is an athletic player that can rebound really well, though his feel for the game is a work in progress.

“It isn’t where we want it to be, but we like K.J.’s potential and think he is going to be a good player in the future,” Brownell said. “Once he learns how to let loose and knows what to do, his talent will show. He can do some things that you can’t coach.”

Brownell likes what he sees in freshman guard Devin Coleman as well, but noted he isn’t where he needs to be defensively just yet.

“He has to understand how to do different things defensively,” Brownell said. “He has the ability to make shots; that is his niche. But, he has to defend better to give us a chance.”