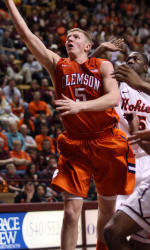 ClemsonTigers.com Exclusive: Tigers Learning to Control What They Can Control

CLEMSON, SC – When Virginia Tech’s Jarell Eddie threw up an ugly shot in the first half of the Hokies’ 67-65 victory over Clemson last Saturday, Tanner Smith just knew the shot was not going to go in.

However, the ball bounced off the back of the rim, hit the top of the backboard and then fell through the basket for three of Eddie’s 15 points. It was that kind of afternoon for the Tigers.

Those chips have been falling in the hands of their opponents as of late. In all, Clemson (11-11, 3-5 ACC) has lost nine games by seven points or less, including last week’s losses at Virginia and at Virginia Tech.

The Tigers will try and end that trend Tuesday night when they host Maryland for a 7:00 PM tip inside Littlejohn Coliseum.

“The hardest part is finishing games,” Brownell said. “If you look at every game we have played that we have been down and had a shot late, we had open looks, but we did not make them. You have to be a closer. That’s the hardest part. You have to put kids in position and then they have to close it. When they refer to Kobe Bryant as a closer, they get him the ball at a spot and he goes to the spot and makes the shot, often times guarded. That¹s the hardest part of the game, and that is what separates good players from great ones.”

As Smith pointed out, the Tigers’ ability to do the little things has played a big role in why they have not closed out games and recorded more wins. Though Clemson ultimately out-rebounded Virginia Tech, 43-34, it allowed the Hokies to secure nine offensive rebounds in the first 20 minutes. Besides boxing out, the Tigers turned the basketball over seven times in the first half, which led to nine Virginia Tech points.

Clemson has little room for error, and that puts a tremendous amount of importance on Tuesday’s game. With Clemson and Maryland tied in the ACC standings with 3-5 records and this being the only meeting between the two teams, the Tigers know they cannot waste the opportunity.

“When it comes down to it at the end of the year, it could be one of those tiebreaker kind of games,” Smith said. “It is a big game for us. I’m glad we are back home. The ACC is real close. It really does feel like anybody can beat anybody. Our margin of error was small out of conference and now that we are in conference, it is even smaller. I didn’t know that was even possible.

“Against Virginia Tech, we once again lost by one possession. You go through plays in the game, and every play we gave up, that was a possession that lost the game for us. That’s how we look at it. It is very frustrating to watch, but it was good for our team to continue to see how important every possession is for us.

“We are not going to be perfect, but there are some things we can change and prevent, and that’s what we have to do.”