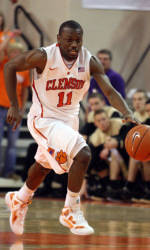 ClemsonTigers.com Exclusive: Tigers Focused on UNC, not the Streak

CLEMSON, SC — The first time Andre Young went to the Dean Smith Center to play North Carolina as a freshman, it wasn’t the Tigers’ long-standing winless streak in Chapel Hill, NC that concerned him. Instead, it was players like Wayne Ellington, Tyler Hansbrough and Ty Lawson that intrigued him more that first visit.

Now, four years later, names like Kendall Marshall, Harrison Barnes, Tyler Zeller and John Henson come to the senior point guard’s mind more than a streak that he has only been a part of twice before.

“Basically, we are going to come and try to continue what we have been doing throughout the year,” Young said. “This is just another game. You can’t let it get to you. It is important that we stick together as a team, especially on the road. “It’s important in road games we all have that vibe and chemistry that you need in order to play well.”

That’s especially important at Chapel Hill where the Tigers will be vying for history Saturday when they take on No. 8 North Carolina at 4:00 PM.

“That’s not what we talk about with our players,” Clemson Head Coach Brad Brownell said. “We talk about the strengths and weaknesses of North Carolina and what we have to do to win the game.”

To win the game, the Tigers (13-12, 5-6 ACC) will have to slow down a North Carolina unit that leads the ACC in scoring. Three of the Tar Heels (Barnes, Zeller and Henson) average at least 14 points per game, while Zeller and Henson provide them with one of the nation’s best frontcourts.

“We don’t have those kinds of guys that have the length that they do,” Clemson’s Tanner Smith said. “We are going to have to try and take them out of positions that takeaway their length a little bit. I think we have two of the more versatile big men in the league with Devin Booker and Milton Jennings. Their ability to move around the court hopefully can get (UNC’s) big men away from the basket a little bit and open some lanes for us on offense, too.”

Though Zeller and Henson will provide problems, it’s the guard play of Marshall that worries Clemson the most. Marshall leads the ACC by averaging 9.6 assists per game.

“Kendall Marshall is a guy that I really like,” Brownell said. “He is a player that I think makes other guys better with his basketball IQ and his passing ability. He is one the best ones that I have ever seen in college.

“They are certainly the most talented team in the league and one of the more talented teams in the country. They have an incredible front line with Zeller, Henson and Barnes. Those are three guys that can affect the game in so many different ways.

“Zeller and Henson can both do it defensively and around the basket, and unfortunately we know what Barnes can do because we saw that first-hand here and in the tournament last season.

“It will be a tremendous challenge for us to try and slow them down.” And in the end, if the Tigers hope to win in Chapel Hill, that will be the only thing that matters, not any streak.