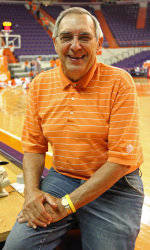 ClemsonTigers.com Exclusive: Tigers Do It for Gary

GREENSBORO, NC – When Jon McGibbon sent Robert Benincasa’s slider over the wall in right field to give Clemson a dramatic 9-7 come-from-behind victory over top-ranked Florida State Friday in the ACC Tournament, the first person the Tigers thought about was Gary.

Gary Girmindl was one of Clemson’s best supporters, attending just about every game and match in every sport at Clemson since 1978. Girmindl saw his last Clemson sporting event at the ACC Baseball Tournament on Thursday when he traveled up from Clemson to watch his Tigers take on Virginia. Soon after the game, Girmindl headed towards home so he could see his doctor on Friday morning. Halfway up the road he felt pain in his chest, which pulled him off to the side of the road, and later took his life with a heart attack.

“We are missing a really close fan of ours,” Clemson Head Coach Jack Leggett said after the game Friday. “He meant a lot to our baseball program. He was at many practices and was always down the first base line yelling many positive things for us.”

When the Tigers (33-25) trailed FSU by three runs in the fourth, fifth and eighth innings, Leggett said he could only imagine Girmindl yelling positive things and trying to get the team’s spirit up from Heaven.

“I was thinking a lot of people were yelling at me and giving me advice,” Leggett said jokingly. “He was one of them. He was just a really good person and was real loyal to Clemson. I was doing a whole bunch of talking to a lot of people during the course of this game.”

Those talks ultimately worked as Clemson made a mad rally in the eighth and ninth innings to topple the Seminoles (43-14) for the third time this season and for the eighth time in the last 11 meetings.

After FSU extended its lead to 7-4 with two runs in the top of the eighth inning, the Tigers answered when catcher Spencer Kieboom ripped a one-out base hit to right centerfield, plating McGibbon and Stolz. Kieboom, who learned of Girmindl’s death early Friday, said he knew Girmindl was cheering for them hard.

“He was always saying positive things,” the junior said. “You hear the story and it kind of puts everything into perspective about how fortunate we are to be here and to be playing. To have the dedicated fans that we have, and he was one of them, it was a shame that this happened.”

But Clemson could have only made Girmindl proud in the bottom of the ninth. After Richie Shaffer, who doubled in a run in the fourth with a lazy fly ball, struck out to lead off the inning, Phil Pohl reached on a base hit up the middle, while Mike Dunster got on with an infield hit.

That set the stage for McGibbon, who, the day before, was 2-4 with an RBI against Virginia. The sophomore took the first pitch Benincasa delivered and ripped it into the Seminoles’ dugout where players scattered to avoid the heat-seeking missile.

Knowing the scouting report on Benincasa, McGibbon sat on a slider right down the middle, which he took over the wall in right field, which sent Clemson into celebration mode.

“The first pitch was a little in, but he came back and did it again with his second pitch and it was right there, right down the middle,” the first baseman said.

For the two tournament games, McGibbon is 5-for-9 with two home runs and five RBIs.

“I was just looking to hit the ball hard,” he said. “That’s what I came into this week thinking, I was focused on hitting the ball hard. He left it right there and I was able to drive it.”

Now the Tigers hope this win can drive them into the ACC Championship Game. Clemson will need to beat Georgia Tech first at 11 a.m. on Saturday, and then hope the Seminoles knock off Virginia in the 3 p.m. game.

One thing is for certain though; Gary Girmindl will be pulling for them.