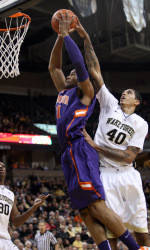 ClemsonTigers.com Exclusive: Tigers, Cavaliers are No Stranger to a Little Offense

CLEMSON, SC – Clemson and Virginia are known for having two of the best defenses in the ACC. The Cavaliers are yielding 51.9 points per game to lead the conference, while the Tigers are not too far behind at 60.3 points to rank second.

With that said, however, the first meeting back on Jan. 31 in Charlottesville, VA might have looked like a defensive struggle on paper, but it was anything but. Virginia shot 55.8 percent from the field and though the Tigers did not shoot lights out, they did convert on 48 percent of their shots in the first half and turned the ball over just four times all night.

“I think it was a little more offensive than we thought it was going to be,”

Clemson guard Tanner Smith said Monday afternoon. “Both teams shot the ball well, executed on offense, but it was also one of those games where every possession became big.

“We are going to have to do a good job again, and really execute on both ends of the floor. We can’t stop them all the time, but there are some things we can fix like our transition defense which was not great. Hopefully, we can make them use a little bit more clock where it makes them take a difficult shot or make a mistake.”

The Cavaliers (19-5, 6-4 ACC) did not make many mistakes in their 65-61 win over Clemson a few weeks back. They shot the ball extremely well in the second half, hitting on 63.2 percent of their shots, including 5 of 8 from three-point range. Mike Scott did a good part of the damage, as the senior connected on 8 of 11 shots for a game-high 23 points. He also was 7 of 8 from the foul line and grabbed 10 rebounds.

The Tigers had no answer for Scott. When he got the ball down low, the 6-foot-8 forward was too fast getting to the basket and usually beat the double team. When he would go up top to set up a screen, he would pop out and nail 15- to 17-foot jump shots. No matter what Clemson did, he found a way to score.

“I think he is the ACC Player of the Year,” Smith said. “When you have an almost automatic 15 to 17 foot jumper, it is tough to guard. I think last week, he went 8-for-8 in a game and they were all jump shots. That’s tough to do.

“He is one of those guys, and he is averaging eight rebounds a game too, that is getting in there and making plays to help his team win games. We are going to have to do a good job guarding him as a team. We cannot expect just one guy to be able to guard him the whole game.”

Though he has an injured left hand, the Tigers cannot expect guard Joe Harris to have an off night either. He scored 19 on Clemson the last time out and Smith says he expects Harris to be more focused than usual because of the injury.

“That’s one of those things where an injury can put you in a more focused state of mind,” the Clemson senior said. “I remember last year when I injured my knee. Every time I went out, I was more focused on every movement I made so I know he will be the same way with his hand.

“He isn’t going to put himself in any bad positions. He will be a very smart player.”

The Cavaliers will have to be leery of Smith’s smarts, too. The Clemson guard is coming off a 20-point, five assist and five rebound night in leading the Tigers to their first win at Wake Forest in 22 years. In that game, Clemson got very offensive as it shot a season-best 58.2 percent from the floor and had six players make at least one three-pointer.

The Tigers were 8 of 18 from behind the arc last Saturday.

“It was nice to have one of those games,” Smith said. “It seemed like we really put things together both offensively and defensively.” Now the question is – can Clemson play defense a little bit better than the last time it met Virginia?

“Both of us are known for our defense, but both have very good offensive players, too,” Smith said. “There were opportunities where we played very good defense and guys make tough shots. Sometimes that happens and sometimes it doesn’t.

“You can always expect to make those tough shots. They call them tough shots for a reason and at the end of the day that’s what we want to force Virginia into doing and I know that’s what they want to force us to do, so executing offensively and getting some easy looks, especially early so we can get some momentum, will be key for us.”