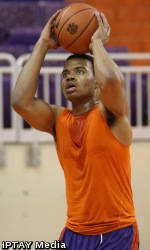 Note: Over the last two weeks, ClemsonTigers.com has taken a look at the men’s basketball team’s offseason player development program for the rising sophomore class. Our final installment in the series focuses on 6-foot-7 forward Bernard Sullivan, who saw action in 28 of 31 games as a freshman in 2011-12.

CLEMSON, SC – None of Clemson’s five scholarship freshmen had to overcome as much from a physical standpoint in 2011-12 as forward Bernard Sullivan. Burdened with asthma since his youth, the Gastonia, NC native suffered from physical exhaustion so much early in the season that he fell significantly behind his classmates on the court.

“Asthma is one of those things that I’ve got to continue to fight through,” he said. “With the medications I’ve taken, it’s gotten a lot better. I did breathing treatments all year long, and now I’m able to go through our workouts due to being mentally stronger.

“The most important thing for me is to continue my conditioning. I’ve gained strength and toned down by about five pounds working with Darric (Honnold). The way Coach Brownell wants me to play, I can’t wear down. That’s the biggest key.”

The way Clemson Head Coach Brad Brownell wants Sullivan to play is to use his versatility in his motion offense through effectively driving the ball from the high post and extending his shooting range.

“We’ll continue to work on Bernard’s understanding of the game,” Brownell said. “He was so far behind last season that it took him a long time, into the second semester, to figure out what we were trying to do. He’ll have a better understanding this spring and summer as we conduct individual workouts. Then it boils down to increasing his shooting range, and having him become more of a factor on the perimeter.”

At 6-foot-7, Sullivan is often labeled “undersized” at the power forward position. In front of him on the depth chart is rising senior Milton Jennings, who has two inches on the younger Sullivan.

Despite the height disadvantage, Sullivan showed flashes of his capabilities in the post this past season as he played in 28 of 31 games. He played the fewest minutes of the freshman class, logging just 7.5 minutes per game. But in ACC play, he shot 50 percent from the floor and had his best game of the season at Virginia Tech with seven points and four rebounds as he attempted to rally the Tigers in the final minutes from a double-digit deficit.

“Me playing the four spot, there are a lot of different things I can do,” said Sullivan, who received the team’s Strength Award at season’s end for consistent dedication in the weight room. “It’s not just one thing. I have to see what the defense is doing.”

One of the things he worked on during individual skill workouts in April was setting good screens and popping off of them to get into his shot quicker. The former four-star prospect out of Davidson Day School has range out to about 15 feet, and should be able increase his workload behind Jennings in 2012-13.

“Bernard is a pretty powerful player and jumper,” Brownell said. “He has good weight and good leg strength. Because of his asthma, he wears out quicker and can’t catch his breath as quick as some of us. As he gets older and learns how to handle it, it will get better.”

Sullivan knows one of the keys to Clemson’s success in 2012-13 will be the improvement he and his classmates make from a conditioning and skill development standpoint.

“It’s not about playing, it’s about producing,” he said. “I’m not spelling anyone anymore, it’s my job to come off the bench and produce. That’s a huge step. I have to do things to help the team win, so that will be a little bit of an adjustment.”

Based on the battle he’s had throughout his life to overcome a breathing problem, it’s an adjustment Sullivan will embrace with a positive attitude and work ethic that is second to none.