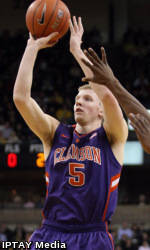 WINSTON-SALEM, NC – There was no better way for Clemson to end a 22-year run of futility at Lawrence Joel Coliseum than to put on its best shooting performance of the season.

Led by Tanner Smith’s 20 points, Clemson shot a season-high 58.2 percent from the field as the Tigers beat Wake Forest 78-58 Saturday in Winston-Salem, NC. It was Clemson’s first victory at Lawrence Joel Coliseum since the facility opened its doors during the 1989-90 season. That year, the Tigers beat Wake 89-75 on their way to an ACC regular season championship.

“It’s nice to get a road win anywhere in the ACC,” Smith said. “They are tough atmospheres and teams generally play very well at home. We came in here with a mindset, though, that we needed to get a win. We knew that we were more than capable of doing it.

“We just had to stay focused and have a little bit more of an attitude towards the game. I think we did a good job tonight doing that.”

Smith, in particular, did a good job. After shooting 2-for-9 against Maryland, he found his stroke in a strange way. His first basket bounced off the back of the iron and went straight up in the air before coming back down and hitting the front of the rim where it bounced in the cylinder for his first three-pointer.

“The first one did not feel too great, it bounced around a little bit,” Smith said. “I thought I was starting off 0-for-1, but it found its way in and the next two, the two that were kind of deep, those were the ones that felt really good.”

The two Smith that felt good were the shots that really got the Tigers (12-12, 4-6 ACC) off and running. The first gave Clemson a 29-28 lead as the Tigers rallied back from a 26-19 deficit. After the two teams exchanged baskets, he then buried another three from the same spot on the wing to put Clemson on top again, 34-32, with 3:26 to play.

A few moments later, Smith keyed an 8-0 Clemson run to end the first half with a pull-up jumper from the right side and then a layup after making a strong move to the post. The Tigers led 42-36 at the break.

“Tanner made some big plays and big shots in the first half, and that really rallied us,” Clemson Head Coach Brad Brownell said.

Smith finished the first half 6-for-6 from the field for 15 points, including 3-for-3 from long range. He finished the afternoon 8-of-9 overall.

“It was pretty nice. It was nice to see the ball go in, and it was nice for us to get a win,” said Smith, who also finished with five assists. “I think a lot of guys played well for us tonight.”

In addition to Smith’s 20 points, the Tigers also got 15 points and five rebounds from Andre Young, who had eight in the second half. Clemson also received nine points from freshman Devin Coleman, who was 2-for-23 from the floor prior to Saturday’s 4-for-5 day.

“When we responded at the end of the first half and got back in the lead, I was really proud of our guys and I told them that at halftime,” Brownell said. “This could have been an issue where we hung our heads a little bit. They were making free throws while we were standing there watching them, and the game could have felt like it was slipping away, and maybe we couldn’t do anything about it.

“But our guys hung in there and battled.”

Smith and the Tigers continued where they left off in the first half to start the second 20 minutes. Smith found Jennings underneath for the first basket, then Young knocked in a trifecta and Smith completed a three-point play as Clemson extended its advantage to 13 points, 50-37, with 18:25 to play.

The Tigers opened the second half by hitting eight of their first 11 shots and led by as many as 23 points at one point.

“We talked at halftime about really starting the second half strong,” Smith said. “We had some momentum going in and we wanted to keep that going through the second half. We wanted to make them call that first timeout early.

“We came out and got some buckets, made some stops and were able to push that lead up.”