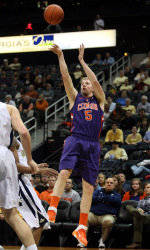 ATLANTA — Until Tuesday night, the best memory Tanner Smith had in Philips Arena was winning an Atlanta Thrashers jersey when he was in high school.

On that night Smith, who grew up just outside Atlanta in Alpharetta, GA, won the NHL replica jersey by chance when he asked his friend if he could have his seat.

“I did not want to sit next to this guy that I did not know,” he said. “My friend said `No,’ but then we switched. When I came down, they called my ticket. He was pretty upset with me, but I still have that jersey.

“It is always fun to come to Philips and Atlanta.”

Smith needed no luck in Tuesday night’s return to Philips Arena. The Tigers forced 18 turnovers and held Georgia Tech to 31.3 percent shooting in a historical, 56-37 victory.

The Yellow Jackets’ 37 points were the lowest a Clemson team has held an opponent in 858 ACC regular season games, since the league began in 1953.

The Tigers (14-13, 6-7 ACC) defended like no other time in their history. The 37 points by Georgia Tech were the fewest by a Yellow Jackets team since 1980 and the fewest a Clemson squad has held them to since 1936.

Tuesday also marked the fewest points Clemson has allowed to any team since Dec. 16, 2008 when the Tigers beat North Florida 76-36.

“I didn’t know any of that stuff,” Smith said afterwards. “We just came out and tried to compete on every possession. I think we did a good job with that, and now hopefully we can carry that over to the next game.”

Smith played a big role in why the Tigers defended so well. The senior had three of the Tigers’ eight steals, while also chipping in on the glass with six defensive rebounds.

“You can use him in a lot of different ways. He approaches everything as a professional. He comes to practice and works. He is a great role model, and obviously what he does off the court speaks for itself. He has graduated in three and half years and with his foundation (Tanner’s Totes) and what he does for other people, it shows his unselfishness and the kind of person he is and the kind of family he comes from.

“That kind of example for our younger players is something you can’t put a finger on or explain how much that means. It has certainly been a privilege for me to coach him these last two years. You can’t ask for a better kid.”

And Brownell could not ask for a better performance against Georgia Tech, either. Smith finished the night with eight points on 4-of-7 shooting. He also had six assists, including three in the opening moments of the second half that sparked a 15-4 run as Clemson put the game away early.

“Coach drew up a couple of nice plays, and I was just hitting guys that were open,” Smith said. “It looks nice, but Coach Brownell drew up some nice plays, guys executed well and they were open.”

But in the corner behind the Clemson bench there was a group of Tanner Smith fans, 45 to be exact, that cheered loud for every basket he made, pass he connected on, rebound he corralled and steal he made. It was a Homecoming of sorts, and Smith enjoyed every moment of it.

“It is always nice to play well in front of family and friends,” he said.

The good news for Smith is that it will not be the last time he gets to play in front of the same family and friends. The next time will be in two weeks when the Tigers play in the ACC Tournament at Philips Arena. Maybe this time, instead of winning a hockey jersey, he will help the Tigers win their first ACC Tournament title.