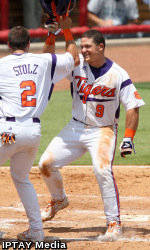 COLUMBIA, SC – There is something about playing at Carolina Stadium for Phil Pohl.

The Tigers’ designated hitter hit a grand slam in the second inning Friday which got No. 2 seed Clemson off and running in its 11-3 victory over No. 3 seed Coastal Carolina in the Columbia Regional. It was Pohl’s second-career grand slam, with his other coming in the very same ballpark in Clemson’s 19-6 win over South Carolina on March 7, 2010.

“I don’t know if it has anything to do with the stadium,” Pohl said with a smile. “I was fortunate enough to see a fastball in a hitter’s count and, thankfully, I put a good swing on it. A couple of years ago I think it was the same thing. I think this one was more wind aided than the previous home run.”

In all, Pohl had five RBIs and two hits in Friday’s win. He had a single to left field in the bottom of the first inning to score Richie Shaffer for Clemson’s first run. The senior also had an RBI hit when the Tigers visited South Carolina on March 3, and had two doubles and two RBIs in the 2011 matchup in Columbia.

In his four games combined at Carolina Stadium, he is 6-for-13, with two home runs and 12 RBIs.

“I don’t know if it’s the stadium, I can’t say that… The whole order swung the bat well today, and I was just fortunate to get a fastball and put a good swing on it,” Pohl said.

Pohl’s grand slam came after the Tigers (34-26) loaded the bases in the bottom of the second with two outs. After Thomas Brittle ran out an infield hit to score Brad Felder from second, Shaffer drew a walk to load the bases and then Pohl sent Austin Wallace’s 3-1 offering over the wall in left field to put Clemson up 6-0.

“We opened the door for them,” Coastal Carolina Head Coach Gary Gilmore said. “We were trying to get away from Shaffer and had Pohl beat us. We have to tip our hat to him.”

Wallace gave up six runs in the first two innings, after allowing 21 runs all season. Prior to Friday, he was 5-0 with a 2.05 ERA.

Clemson scored in every inning but two on Friday, and scored nine of its 11 runs with two outs. Ten of the Tigers’ 13 hits also came with two outs.

“I don’t know how many they got, but they had a whole bunch of two-out hits,” Gilmore said. “You have to give Clemson credit.”

Gilmore also gave Pohl the credit for coming through when his team needed him the most. Leggett says that for the Tigers to win the Columbia Regional, they are going to need performances like this from his senior throughout.

“He has to come through for us,” Leggett said. “(The other) teams are going to be careful when it comes to Richie, so Phil has to step up for us. He did a nice job today.”

Pohl says today can go a long way in helping his confidence, and he is ready for any team in the Columbia Regional to make the same mistake Coastal Carolina did on Friday.

“It’s been happening all year,” he said. “Most teams are pitching around Richie because of the caliber of hitter that he is, but being able to step in and get some big-time hits is definitely good. It gives me a bunch of confidence, and I think it gave the guys and our offense a bunch of confidence today.

“We were able to relax a little bit with that early lead, and really stick to our game plan. We cut down on the strikeouts today and that was huge for us. We put the ball in play a lot. I’m sure teams are going to be careful with Richie in the future so I’m going to have to be able to lay off the bad pitches and put together some good at-bats for us.”

History shows, if Pohl continues to play at Carolina Stadium, then he will do just that.