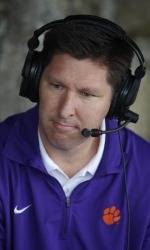 ClemsonTigers.com Exclusive: Plenty of New Faces, Old Ones for Brownell in Year Two

SUNSET, SC – It might be year two for Brad Brownell and his staff at Clemson, but the head men’s basketball coach said it feels like year 1-A.

“There are so many new kids,” Brownell said Wednesday at the annual Clemson basketball media golf outing from the Reserve at Lake Keowee. “I think our older guys are much more comfortable and excited about how we play and how we do things. You see that in our daily interaction with them, while our new kids look like deer in the headlights right now. That’s okay, though. That’s part of the process.”

In all, the Tigers welcome six new members – guards K.J. McDaniels and T.J. Sapp, and forward Bernard Sullivan – to a program that has advanced to the NCAA Tournament four straight years.

“I always enjoy this time of year because this is when you begin to get the pieces that will put a team together,” Brownell said. “That’s one of the things I really enjoy about coaching – trying to take all these different parts and make them fit.”

Clemson has enough questions this season that putting those different pieces together will be a challenge. Besides finding out which of the six freshmen will be able to contribute, he must first find out who can replace guard Demontez Stitt and center Jerai Grant, both of whom were lost to graduation.

In his first season at Clemson, Brownell installed a new system on offense and changed the way the Tigers played defense, while leading them to a 22-12 overall record and the program’s first NCAA Tournament victory in 14 years.

He did all that despite the fact he had to replace one of the best players in school history in Trevor Booker, who now plays in the NBA.

With all the new faces and the chore of replacing two productive seniors, there could be some growing pains when Clemson tips off the season on Nov. 11 against Gardner-Webb.

The Tigers do have some players with experience, and ones that have been productive the last several years. Tanner Smith and Andre Young have played significant minutes since arriving as freshmen in 2008, and both have started each of the last two seasons.

In the frontcourt, Clemson returns a pair of juniors in Devin Booker and Milton Jennings.

Booker was a starter a year ago, while Jennings has been a key reserve the last two years.

“Devin and Milt have shown they can be good players, but now it is time for them to prove it consistently,” Brownell said.

Brownell said that despite the loss of some key players, the Tigers can still have a good team; they just have to find the right pieces and make it work within his style.

“The strengths of our team this year will be the versatility of the personnel in terms of what they can do,” he said. “Milt and Devin are post players that play away from the basket. I’m hoping our motion (offense) will be a little bit better this year. We ran motion last year, but we did not run as much pure motion as I have done at some other places.

“We wanted to keep Jerai around the basket more. Now we have a team that has an understanding, they have a base; they know what is going on. We can move all five guys on the court to all different spots and the ball can move.

“The guys have an understanding of what we are trying to do. When Bobo (Catalin Baciu) is in the game, we will be a little different. But, I do think one of our strengths is the versatility in which we can play because of the different types of big men we have.”

The Tigers take to the court Friday, Oct. 14 for their first official practice for the 2011-12 season.