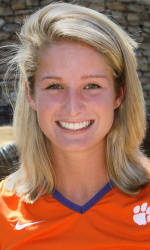 CLEMSON, SC – The day of Clemson’s match against ninth-ranked Florida earlier this month, Clemson Head Coach Jolene Hoover made a tough call that has since paid off greatly for her volleyball team.

Looking for a spark in the back line of her defense, as well as getting better passes to set up her setters, Hoover decided to move junior Natalie Patzin to libero. Though it took some getting used to, Patzin’s presence on the back line has helped the Tigers win five straight matches, including Friday’s 3-0 sweep over Georgia Tech to open the ACC season.

“Natalie is passing really, really well,” Hoover said. “She is probably our best passer on our team and having her in that spot, I think, has really helped our siding out. It gives us three really good passers with Serenat (Yaz), Natalie and Kristin Faust.

“We are a tough team to get out of system and that is a good thing.”

In the win over Georgia Tech, Patzin had nine digs overall and recorded five assists. Another solid night from a player who had never played libero in her career before Sept. 3

“When Coach told me about that move, I was like, `Alright.’ I just went in there with a lot of energy and tried to get my teammates pumped up.

“I think I’m getting more comfortable with the position. It is definitely different (from outside hitter). It’s just about getting adjusted to the movements and the different angles.”

Patzin says the game comes a lot faster from the libero position. She does not have as much time coming to the ball like she did when she played outside hitter.

“You have to react faster,” she said. “Also, you have to change your angle more. It’s a sharper angle to pass.”

Patzin also has to play the role similar to that of a middle linebacker in football, if you will, when communicating with her teammates.

“You have to watch what Jodi (Welp) is calling for hitting. Your hitters know what they are running, so you have to let them know that you are back there for them and that they can count on you.”

That communication allowed the Tigers (9-3, 1-0 ACC) to sweep Georgia Tech for the first time since 2007. Clemson used smart play all night to outmaneuver the Yellow Jackets. Whenever there was an empty space on the Tech side, the Tigers seemed to find it with a dink or a kill from Alexa Rand, Yaz or Sandra Adeleye.

“We had the opportunity to see them live last night because of the (Clemson Classic) tournament. Usually, the team doesn’t get that opportunity,” Hoover said. “Usually, we are watching film all the time and showing them clips, but I think seeing them live really helped because we were able to point out some things that were a part of our game plan. We executed really well.”

Yaz, who was named the MVP of the tournament, led Clemson with 11 kills, while Rand had nine. Adeleye totaled seven blocks in the victory.

“We had a lot of energy,” Patzin said. “We beat them 3-0 in the spring so we knew they would come in here with a lot of energy as well tonight and would want to get us, but we had a good game plan. Our serving and passing was the key. That really opened up our options. It really helped us.”

Just like Patzin’s move to libero has helped the Tigers get on their current winning streak.