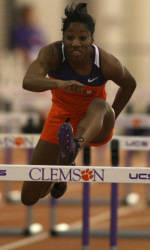 ClemsonTigers.com Exclusive: Patience Has Paid Off for Harrison

CLEMSON, SC – It was not her best day as a hurdler, but it was a day that went a long way in Keni Harrison’s run to her first ACC Championship.

As she got out of her block to begin the 400-meter hurdles this past March at the Jim Click Shootout in Tucson, AZ, Harrison was a little slower than usual. She quickly fell behind because of it, causing an Arizona athlete to fly past her. Being this was her first collegiate race, she tried a little too hard in trying to catch up, causing her to hit the eighth hurdle.

Harrison fell and almost came to a complete stop, before remembering her head coach was watching.

“I remembered to tell myself to keep going,” the Clemson freshman said. “I didn’t know what Coach (Lawrence) Johnson was going to do to me, but I knew if I stopped, I was going to get in trouble. I just gave it my all and tried to finish it.”

Harrison ended up running a decent time, and her resiliency to finish the race meant a lot to her head coach.

“I had to tell her that it did not go good, but I tried to encourage her, and she has grown from that.”

Harrison grew into an ACC Champion in the 400-meter hurdles, and welcomed herself to the track world at the same time with an unforgettable overall performance. She finished second in the 100 hurdles that same afternoon, and then helped the 4×4 relay team conclude Clemson’s convincing sixth straight team championship with another gold medal.

“She has grown exponentially as an athlete, to be such a young freshman,” Johnson said. “She has been around a bunch of young hurdlers. She is a good kid, and she is one of those kids that always asks questions. She wants to learn. She wants to know how to do these things the right way.

“As a freshman, she has three more years here to try and be the best.”

And that’s what Harrison has focused on doing. With each race she has gotten better and better. During the indoor season, she qualified for the 60-meter hurdles at the NCAA Championships, setting the stage for her dominating performance at the ACC Outdoor Championships last month.

“Some races, I really don’t get out hard, but I finish strong,” Harrison said. “I think as the meets go on, especially the bigger meets, I think everything is going to click at the end and everything will turn out great.”

Harrison said she has been able to prosper this year because Johnson has been patient with her. Her coach said that is by design, because he knows she is still learning and isn’t as seasoned as some of his veteran athletes.

“I always remind myself that she is a youngster,” Johnson said. “She is going to get better over time and sometimes because she is maturing so fast, I forget she is a freshman and sometimes my expectations may be too big for her and her development right now.

“I think the more I learn about her and the more about what motivates her and what her strengths and weaknesses are, she is only going to get better.”

Harrison got better on Saturday at Clemson’s Bob Pollock Invitational. She finished second in the 400-meter hurdles and also ran with 4×4 relay team. Saturday’s meet was just another day of training, as the hurdler tries to get better with the NCAA East Preliminary Round scheduled for May 24-26 in Jacksonville, FL.

“It has been a while since we have run, so we are focused on the intermediate hurdles today,” Johnson said. “We did run the short hurdles. We have done that all year. It has always been the short hurdles first. We have been looking at a lot of different things in practice, just tactical things.

“To see her come out on a tough day to run hurdles with it being hot and windy, she got some of those things done today.”

Hopefully, for Harrison, that work will land her in the NCAA Nationals in both events next month.

“Coach Johnson isn’t as aggressive with me as he is with the upperclassmen, and that has helped with my confidence,” Harrison said. “I’m just starting to understand everything and as the season goes on, he gets tougher and tougher, but he knows I can handle it more and more.