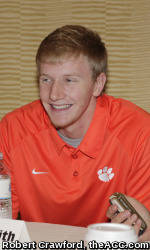 ClemsonTigers.com Exclusive: No Time for Clemson to be Complacent

“Guys, you can easily get yourself into a feel that you are doing pretty well because you are comparing yourself to these six freshmen,” the Clemson coach told Smith and the Tigers’ five other returning players following practice.

For Smith, who along with guard Andre Young addressed the media Wednesday at ACC Operation Basketball from the Ritz-Carlton in Charlotte, NC, it was a wake-up call. It was a wake-up call because Smith and Young will not be facing inexperienced players when the ACC season begins.

“We have to compare ourselves to other guys in the league and in the country that have been in programs for four years,” the senior said. “We cannot get complacent in practice, seeing that we know what to do and other guys don’t.

One of those guys is 6-foot-7 forward Bernard Sullivan, who is expected to help Clemson in the post this season along with returning players Devin Booker and Milton Jennings. Sullivan grew up in the Charlotte area and was a four-star prospect from Davidson Day School, where he averaged 15.6 points and 7.4 rebounds per game his senior year.

“He is a very athletic guy around the rim,” Smith said. “He looks kind of big and heavy, but when he gets around the rim, he can jump with the best of them. That’s something we are going to need. I’m not going to say we are not as big as we were last year because we are, but when you lose a big guy like Jerai (Grant), who could get some rebounds, we are going to have to be a better rebounding team.

“We play teams in this league that have guys that are 6-foot-8, 6-foot-9 and seven feet tall, that are long and athletic. We are going to have to get some rebounds this year, and guys like Bernard can really help us do that.”

In addition to Sullivan, the Tigers will also look to get quality production from guards K.J. McDaniels and T.J. Sapp. Those three will be important due to the fact Clemson must replace 2011 seniors Demontez Stitt and Zavier Anderson.

“They are trying to take things in right now,” Young said. “They obviously don’t want to slow up practice, but there is a lot being thrown at them. But as seniors, and even the rest of the upperclassmen are trying to help, we are helping them with that transition and giving them a couple of pointers every practice.”

Young said he and the rest of the upperclassmen are excited about the talent the six new guys bring to the squad, and they like the challenge of being a mentor to them as they go through the course of the season.

“We are looking forward to it,” he said. “We all realize we are going to have to be the producers this year. I think it showed in our off-season workouts. I think we have all gotten better. Guys have really been working hard in the weight room and on the court, and it is starting to show and carry over into practice.

“Now, we just have to make sure that carries over into the games as well.”