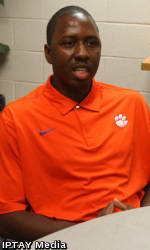 CLEMSON, SC – He did not think anything of it when he made a dinner reservation for him and his wife at Charlotte’s McCormick & Schmick’s restaurant.

“I called them up and asked for a table for two in the corner, where it was quiet, so we could have a nice evening alone,” Steve Smith said. “They were pretty quick to honor my request. They said, `Sure Mr. Smith, we will get that taken care of.'”

Still not thinking about the fact he shares the same name as Carolina Panthers wide receiver Steve Smith, Clemson’s new men’s basketball assistant coach brought his wife Fran to the upscale restaurant for a nice evening in the “Queen City.”

“When we got there, one of the guys said `There he is. That’s him,'” Smith recalled. “The other guy said, `That’s not him.’ When I told the lady I was Steve Smith, one of them said, `I told you that was him.’ The rest of the night, people would come out of the kitchen and peak around the corner to get a look at me. It was pretty funny.”

Though he doesn’t totally look like the Panthers’ Steve Smith, Clemson’s Smith displays just as much confidence in everything he does.

“I don’t lack any confidence,” Smith told the Clemson media Friday morning. “It all goes back to the way in which I got here. I was not a big-time player. People told me `no’ my whole life. I kept working and grinding, and now I’m here. There is no need for me not to be confident.”

Smith’s ability to lead, and the confidence he had in himself to believe he could play with anyone, led his former high school coach, Phil Strother, to say one day after practice, “You are going to be a coach one day.”

Following his playing career and a stint in the military, Smith saw what Strother did all along and became an assistant women’s basketball coach at Allen University. From there, his coaching journeys have taken him to USC Upstate in Spartanburg to Statesboro, GA, where he helped George Southern orchestrate an 11-win improvement in the regular season of the Southern Conference this past year, the second-largest single-season turnaround in the conference’s history.

That journey has now taken him to Clemson, where all along, he had the confidence to know he could coach at a big-time basketball program in the ACC.

“This is definitely a dream come true,” Smith said. “I have been a basketball fan my whole life, and this is the upper echelon of college basketball. It is arguably the best conference in America. So to go the route that I took and work my way through it with hard work and determination, and I still got here, there’s a lot to be said for that.