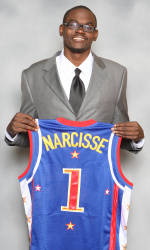 CLEMSON, SC — Bryan Narcisse will never forget the first time he saw the Harlem Globetrotters. He was a little boy and he traveled from his home in North Augusta, SC across the Savannah River to the James Brown Arena in Augusta, GA.

The Globetrotters did not disappoint, either. They did all of their crazy antics, dribbling the ball through their opponent’s legs, crazy behind-the-back shots and passes, and of course, the bucket of water and the confetti they throw on fans and opponents.

Narcisse also remembers a guy by the name of Curley Johnson, a point guard for the Globetrotters, who could dribble the basketball as well as anyone as he had ever seen.

“I remember him dribbling and sliding on the floor,” Narcisse said. “People couldn’t get the ball from him.”

So Narcisse went home and tried to emulate what Johnson did. He quickly found out he could not do it as well.

“I tried it, and ended up with a lot of floor burns,” he laughed.

Narcisse, who graduated from Clemson last December, will probably get a few more floor burns in the coming months as he trains to be a Harlem Globetrotter. He was one of several players drafted Tuesday by the world-famous organization.

“It’s going to be fun to be part of that,” Narcisse said. “I look forward to adding more memories with them.”

Narcisse first learned of his chances of being a Globetrotter when he was picked as an alternate for the Slam Dunk Contest back in March.

“I guess it all started back when Phil (Sikes, from sports information) called me about the dunk contest,” he said. “Two days before the dunk contest, someone dropped out and they had an extra spot. Obviously, I wanted to still do it.”

Narcisse, who helped the Tigers to three straight NCAA Tournaments, knew the Globetrotters had people watching the dunk contest.

“I knew they usually took at least one person from the college dunk contest, but last year they actually took three,” the former Clemson player said. “More than anything I wanted to have fun and represent Clemson, but in the back of my mind I knew somebody from the Globetrotters would be there.

“I have always loved the Globetrotters, because they are more than basketball. It’s reaching out to the community. It takes you back to the love of the game. It’s not all about the money or moving up your status. It’s sheer enjoyment, and I love it.”

Narcisse finished third in the dunk contest, and his last dunk, which he caught off the shot clock and then windmilled for a perfect score, caught the Globetrotters scout’s eye. The 6-foot-6, 225-pound forward also had a dunk in which he brought the ball between his legs for a one-hand jam that started off the evening and brought crowd to its feet.

“After the dunk contest, I began to talk with a guy (Justin Haynes) about possibly being my agent,” Narcisse said. “Through communications with him, he started the ball rolling and saw that there was interest from the Globetrotters as well. We’ve been in touch a little inside of a month after the dunk contest. Since then, we’ve talked about what it would be like.

“I was aware they had a draft, and that they wanted to draft me. I thought it would be really cool, but I wasn’t sure it would end up happening. By the grace of God it is, and I’m really thankful for that.”

Narcisse understands being a Globetrotter is a big-time commitment since he will be traveling the world to show off his talents and entertain children and adults alike. But, it’s something he has always wanted to do since the first time he saw them in Augusta those many years ago.

“It’s another chapter in my life. A lot of people tell me to see the world after college,” he said. “There’s something to be said about what the Globetrotters do, and that’s take a positive message through basketball around the world. Having the chance to do that, I’m extremely excited to be a part of that. It’s going to be a fun transition from college. It will be different, but I believe the positives and good we will do in the community will vastly outweigh my feelings.

“They basically fly you around the world to have fun, play basketball and entertain kids. Where do I sign up? Even in Clemson, I was in the community every chance I got. My mom always told me that the things I’m doing aren’t about me. I can see that message echoing throughout the Globetrotters organization. They put on clinics and camps. They spend time with fans after the game. It’s more than a game to them, and I love that. Basketball is the medium through which it happens, but it’s not the end-all. I love that message.”

Now it’s time for Narcisse to start learning how to slide with the basketball and dribble at the same time, while not getting any floor burns.

“I don’t have many tricks yet, but that’s what training camp is for,” he said. “That will be a time when we learn a whole bunch of tricks. That will be fun, learning from past Globetrotters. They have three coaches with over 50 years combined Globetrotters experience, so it’ll be fun to learn from them.”

And it should be fun watching Narcisse have fun while living out his dream.