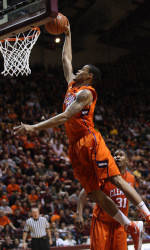 BLACKSBURG, VA — K.J. McDaniels has only one excuse for his missed free throws in Saturday’s 67-65 loss to Virginia Tech that could have tied the game in the final three seconds. He has to work harder to make sure he does not miss them the next time.

“I have to work harder and shoot more free throws in practice, obviously,” he said. “I’m just going to have to recover and bounce back.”

Odds are the freshman will do just that. He has already done it once. He bounced back from an ankle injury suffered a few weeks back to have a career-day at Cassell Coliseum in Blacksburg, VA, scoring a team-high 14 points, while grabbing five rebounds and blocking five shots.

Even though he missed the two free throws with 3.3 seconds to play, Clemson Head Coach Brad Brownell was impressed with the way his freshman guard put himself in that position in the first place. McDaniels took the ball at the top of the key with seven seconds to play and blew past his defender to get the basket. On the way up for an apparent dunk, he was fouled by Virginia Tech’s Jarrell Eddie.

“I told him that was a big time drive to the basket,” Brownell said. “Hopefully, he has confidence from the standpoint that we went to him. He was playing well. He was aggressive. We thought he could get to the basket in some way and get it up on the glass and make a play or get fouled.

“He had a read of Andre (Young) in the corner and (Devin Booker) if he felt like he could not make a move. He just decided to put his head down and go make a play, which I’m proud of him for that. It’s unfortunate. You feel bad that he missed the free throws, but hopefully it is a learning process that he will make some other time for us.”

McDaniels made the most of his first career start. His presence on the floor was the energy the Tigers (11-11, 3-5 ACC) needed, especially in the first half when they fell behind and trailed by as many as 17 points on three different occasions. On the offensive end, he made three of five shots, including a thunderous dunk with 17 seconds to play to pull Clemson within 14 points.

He also had three of his five blocks in the first 20 minutes. With forward Milton Jennings still serving a suspension, McDaniels took advantage of his opportunities in practice and then made the most of his first start.

“Last week, he had some ankle issues and he was not practicing very well when he did practice. When he did, he was very gimpy and feeling a little sorry for himself,” Brownell said. “We told him, it is basically in or out. `Do you want to play or not? If you want to play, you better quit talking about your ankle.’

“He had a great practice two days ago, one of his best of the year. He followed that up with a pretty solid practice yesterday, so I decided he has earned the right to have a start and we felt because of his length, that would help us as well. I thought he did some really good things tonight.”

Another freshman also did some good things for the Tigers on Saturday. Bernard Sullivan, who has had up and down issues with his asthma all year, came off the bench and scored seven points and had four rebounds in nine minutes. Both marks were career highs for the Gastonia, NC native.

“I just wanted to come off the bench and give my team a spark and do the best I could,” he said. “When you come off the bench, you expect to be an energy guy so when I came off, I made sure I brought that energy to help get our team going.”

Sullivan’s first basket ended a five-minute scoring slump for Clemson in the first half, and then his layup while being fouled late in the game allowed Clemson to trim the one-time 17 point deficit to nine points, which sparked the Tigers’ late rally.

“Bernard was great. It was the best game he has played all year,” Brownell said. “I have not seen that kind of energy out of Bernard very often. He still is unsure about things he can do during a game, but I thought he gained confidence. He made that jumper and then had a tremendous drive in the first half. He had a heck of a play late in the game where he made that tip and got fouled.”

After Sullivan’s three-point play, McDaniels showed signs that he can take over a game as he produced back-to-back dunks to pull Clemson within three points, 66-63, and then he made the drive to the basket that nearly won Clemson the game.

“It went well,” McDaniels said. “My ankle is kind of messed up, but I just had the mindset that I was going to go out there and play as hard as I could.”