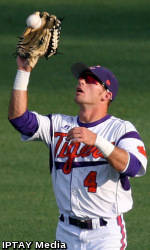 GREENSBORO, NC – Batting practice is one of most baseball fans’ favorite things to attend. Usually they are there to watch a big-time slugger hit baseball after baseball out of the ballpark. And though the Clemson Tigers have hitters that can stand up next to anyone, watching what centerfielder Thomas Brittle is doing in the outfield can be just as entertaining.

While guys like Richie Shaffer and Phil Pohl are trying to perfect their hitting, Brittle is perfecting his skills in centerfield. Tracking down fly balls like a heat-seeking missile does its target.

“In BP I take as many balls live off the bat as I can,” the junior said Wednesday prior to practice. “The best way to get reads is to get them off the bat. The more you do that, the better you get at getting jumps and you know where the ball is going. That has helped me more than anything.”

That has helped Brittle become one of the best centerfielders in the ACC, and a regular on SportsCenter’s Top 10 Plays on ESPN. Several times this year he has stretched out his body and stole hits away in key games against Miami, Georgia, NC State and Florida State, to name a few.

“He is willing to throw his body out there,” Clemson Head Coach Jack Leggett said. “He has made plays like that for us all year. He has been a great addition for us in the outfield and at the plate.”

Brittle, who will try and help Clemson beat Virginia in the ACC Tournament Thursday, is hitting .313 with seven doubles, eight triples, two home runs and 33 RBIs. His eight triples rank fifth in the nation and first in the ACC, and are the most by a Clemson player since 1995.

Three times this year, he has either won or tied a game in Clemson’s last at-bat. He had game-winning hits against Charleston Southern and NC State, while tying the game against his old team, the College of Charleston, in the 11th inning with a run-scoring two-out hit. The Tigers went on to win that game, 4-3.

“I did not think it was going to be like this,” a modest Brittle said. “I was just going to try and make the best of my opportunity this year. Some good things have happened. I have gotten some breaks here and there.

“At the beginning of the year if you had asked me if this was going to happen, I would have said there wasn’t a good chance. But I was lucky enough to have a good year and have good things come out of it.”

One of those good things was the honor of being named Second Team All-ACC earlier this week. Brittle has made so many big plays he is almost expected to make them now by his coaches, teammates and fans.

“I like to think it is expected,” he said. “Any ball that is in the air, I always feel upset if I do not get to it or catch it. Whenever the ball is hit, I just try to do the best I can to get to it anyway I can and hopefully I can come up with a play.

“Usually, I see the ball immediately. Sometimes you will get an umpire or a fielder in your way, but for the most part I see it come right off the bat, and then it is `go get it and come up with a catch.’ “

Going and getting the baseball will be an even bigger challenge for the junior this week. NewBridge Bank Park, though short down the lines, has a large outfield, especially in the gaps to left- and right-centerfield. Brittle is sure to have one of his signature diving plays over the next three or four days because of that.

“I really don’t look at it as a challenge,” he said. “I have been playing on pretty big fields all year, and our field (at Clemson) is really big in center. (NewBridge Bank) is a little bigger in the gaps towards center, but I don’t really think it will be a big challenge. I’m going to take it the way I do all the other games and go from there.”

Either way, Brittle will be entertaining to watch.