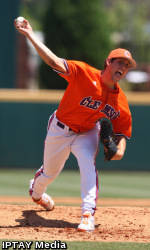 COLUMBIA, SC – When he woke up Sunday morning knowing he was getting the baseball with the 2012 season on the line, Clemson pitcher Dominic Leone knew he wasn’t going to fail.

Three days before he was to pitch in the biggest game of his career to this point, Leone was back home in Norwich, CT with the rest of his family laying his 14-year old cousin Joe Kelly to rest. Kelly died last Sunday when he lost his battle with brain cancer.

“He went out last Friday night and was fine,” Leone said. “Then Saturday morning, he became really sick. They rushed him to the hospital, but he couldn’t recover.”

Kelly’s cancer had spread to his arm in recent years, and he battled the disease as best he could with chemotherapy and other means of treatment. Leone says Kelly was his biggest fan and was a huge Clemson baseball fan.

So when Coastal Carolina got runners on first and third with one out in the bottom of the sixth inning with Clemson clinging to a one-run lead, Leone thought about Kelly and what he would do.

“He was a fighter,” Leone said. “He would not give in to the pressure. He never gave up. How could I let that get to me?”

And he didn’t. With the tying run 90 feet away, Leone struck out Justin Creel to record the second out and then got Tripp Martin to pop up to Clemson catcher Spencer Kieboom to end the threat. From there, he retired the Chanticleers in order on seven pitches in the bottom of the seventh to end his afternoon.

Scott Firth came on in relief in the eighth inning to finish what Leone started as Clemson advanced in the Columbia, SC Regional with a 5-3 victory.

“When I was out there battling, I was thinking of him,” Leone said. “He was a battler. He would not give up, so I wasn’t going to. It helped that I also had thirty other guys in that dugout helping me out and pulling me through.”

Those 30 other guys helped Leone by rallying twice to tie the game and eventually take the lead. One of those guys was shortstop Jason Stolz, who homered in the third inning to tie the game, and then in his next at-bat, in the fourth inning, he sent a two-run homer over the wall in left field.

That gave Clemson a 4-2 lead at the time, and the Tigers never looked back.

“It was a tough week,” Leone said. “When I got back, I think the most comforting thing for me was that I had all of my teammates around me. They were very supportive. I got a lot of hugs when I came back in the dugout.

“There was a release (emotionally) when I got back to the baseball field. I was able to focus on baseball again and keep Joe in the back of mind and not let it affect my performance.”

It didn’t. Leone finished his day allowing only two earned runs off six hits, while striking out six Coastal Carolina batters and earning his seventh victory of the season.

“I wanted to throw strikes and I told (pitching) Coach (Dan) Pepicelli to go ahead and ride me and try to save some of the other guys for as long as I can go. My mindset was to really take it one pitch at a time and one inning at a time. Coastal is a good team. They put the ball in play and they make you work.

“I really could not think ahead and prepare for batters ahead. They make you focus on one pitch at a time.”

And when it mattered most, when the game was on the line, Leone thought of Joe. Then he went and won the game for him.