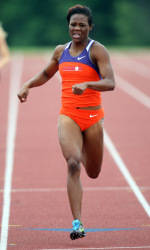 DES MOINES, IA – After an entire day spent traveling Monday, the 18 members of the Clemson track & field program that made the trip for the NCAA Outdoor Championships took to Drake Stadium for a walkthrough Tuesday. Clemson’s women are ranked No. 5 in the nation heading into the national meet, thanks in large part to championship contenders such as Alyssa Kulik and Marlena Wesh.

Wesh qualified for her first NCAA Outdoor Championships meet, and she will be among the favorites in the open 400, whose semifinals are Wednesday. She also has the 4×100 relay semifinals Wednesday and the 4×400 semis on Thursday.

For now, her main focus is on qualifying for the final of the 400 dash. During indoor season, she was the pre-championship favorite and had one of the top preliminary times, but was disappointed with a fifth-place finish. She hopes for better fortune this time around.

“Every day at practice and at night, I am just thinking about indoors,” she said. “I didn’t execute the way I normally did. If I do what I did to get here, I’ll be fine. I was praying this morning about how thankful I am to be here – it’s a good feeling.”

Clemson also feels good about its chances with both women’s relays. The 4×1 team ran a season-best 43.45 early in the season, but has spent much of the outdoor season fluctuating its first leg. Whitney Fountain and Stormy Kendrick are candidates for the lead leg Wednesday. In the 4×4, Wesh’s sizzling anchor leg at the NCAA East Prelims propelled the group to nationals.

Both relays have been assigned fast heats, where pre-championship favorite and the nation’s No. 1 ranked team LSU will be among those competing alongside Clemson.

“At the end of the day, competition is what’s going to push us to go faster,” Wesh said. “LSU has the target, and we’re excited to go up against them and show what we have. If Dezerea (Bryant) and I can get our exchange down perfectly, we’re going to fight and be in the mix.”

Kulik has had a decorated senior year academically. Last week, she was named a candidate for the Capital One Academic All-America Team. She earned postgraduate scholarships from the ACC and NCAA. She has already been accepted into and started a graduate program in speech pathology at the University of South Carolina in Columbia.

This week, though, Kulik’s focus will be bringing home hardware in the form of the national championship trophy in the steeplechase.

“It’s anybody’s race,” she said. “I know Coach (Herbster) thinks I have a shot. I’ve raced all of these girls before, and I’ve either kept up with or beaten them.”

One thing Kulik has on her side as she heads into Wednesday’s semifinal is the experience factor. She ran at this same track last season in Drake and came home with a fourth-place finish. And this year, she’s run even faster times prior to the national championship meet.

“I’m a little more comfortable knowing what to expect this year – last year it was a whole new thing to me,” Kulik said. “There are a lot of fast girls that will be competing this week. I won’t worry about my time for prelims. I just want to feel comfortable inside the automatic qualifying group. In order to do well, I’ll have to hit a personal best in the final if I make it.”

Fraser’s Upcoming Plans. Clemson junior Warren Fraser is in a unique situation. He’s qualified for the NCAA Outdoor Championships in the 100 dash a second straight season. But he’s also optimistic about qualifying for the upcoming Olympic Games with his native country, the Bahamas. He ran 39.68 with the country’s 4×100 in the USA vs. the World event at Penn Relays. After this week’s meet he will re-join the Bahamian team in an attempt to make it onto the top-16 performance list to qualify.

“When we ran at Penn, we fumbled all the exchanges and it was the first time we ran together,” he said. “They just ran a little faster in Brazil, but once we get all the relay legs together, I think we’ll run in the 38 second bracket.”

While the Olympics may be on his mind, Fraser is first focused on Wednesday’s semifinals in the 100 dash, where he is coming off a personal best 10.27 two weeks ago despite somewhat of a slow start.

“There is no clear-cut winner in the field,” he said. “We’re all bundled up together. I hope to be in the finals and one of the contenders for first place.”

Gaining `Mo’mentum. Senior hurdler Monique Gracia made it to this very meet a year ago and helped the 4×100 relay to All-America honors. This time around, the Miami, FL native qualified as an individual for the first time, and in two different events – the 100 dash and 100 hurdles.

“I know what this feels like and I know what the crowd is like, so I’m not going to overreact or be too nervous since I’ve been here,” Gracia said. “I was pretty surprised to make it in the open 100 because my best time coming into the East Prelims was only 11.52. I expected to do well, but I felt bad for some of our other girls. But, everything happens for a reason and something good will happen.

“I feel confident going into the hurdles. I’ve been pretty consistent. This week, my goal is to run under 13 seconds. I know I can do it because last week I had strong practice sessions.”

USTFCCCA Regional Honors. Three members of the Clemson track & field program were honored by the U.S. Track and Field and Cross Country Coaches Association on Monday. Director of Track & Field Lawrence Johnson was named Women’s Coach of the Year for the Southeast Region for the third consecutive outdoor season. In addition, Tim Hall was named Women’s Assistant Coach of the Year and Wesh received the Women’s Track Athlete of the Year recognition.