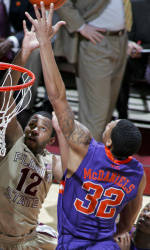 Note: Over the next week, ClemsonTigers.com will take a look at the men’s basketball team’s offseason player development program for the rising sophomore class. Our first feature is 6-foot-6 forward K.J. McDaniels, who played in 30 games as a freshman and averaged 3.9 points per game, while blocking 20 shots, third-most on the team.

CLEMSON, SC – The final two games of Clemson’s men’s basketball season were pretty much a microcosm of the way it went in 2011-12 for freshman swingman K.J. McDaniels.

In 22 minutes at Florida State, he had 16 points, seven offensive rebounds, four steals, two blocked shots, and countless highlight-reel plays. In seven minutes against Virginia Tech in the ACC Tournament, he did not score a point or grab a rebound as Clemson’s season came to an abrupt end.

It’s that type of up-and-down performance from game to game that Head Coach Brad Brownell and his staff look to eliminate as the Tigers progress through individual skill workouts this spring and summer.

“Our freshman, now sophomores in our system, have all gotten their feet wet and gained some experience, but now they’ve got to become productive players,” said Brownell, who is able to spend two hours (three 40-minute sessions) per week instructing each player through workouts.

Productivity varied during McDaniels’ freshman season. He scored double figures five times, more than any of his classmates. He also failed to score in 10 games.

What McDaniels lacked in consistency, he was able to make up for with his athleticism. He had 20 dunks, second-most on the Tiger team in 2011-12, despite playing just 10 minutes per game. Forty-five percent of his made field goals came on dunks, by far the highest ratio on the team.

He made an impact on a number of games. Against UTEP in the Diamond Head Classic, he played 21 minutes off the bench and hit two threes and a pair of dunks and finished with a team-high 13 points. At Miami, he scored 11 points in just 17 minutes. His biggest contribution may have come in the loss at Virginia Tech, where he earned the start and played 28 minutes. He responded with a 14-point, five blocked shot performance. His five blocks were a single-game high by any ACC freshman in 2011-12.

With performances such as those, McDaniels knows he won’t be able to use the element of surprise with his opponents.

“I’ll move higher on the scouting report (next season),” said McDaniels, who averaged 3.9 points per game last season. “Hopefully, I can be a weapon for the team.”

For McDaniels to be a weapon, he’ll need to continue to show improvement in a number of areas. For starters, Brownell has him working out four times a week with the team’s strength coach, Darric Honnold, to gain weight and improve his durability.

Brownell would also like to see the athletic McDaniels continue to develop his skills as a basketball player. One of the things he has worked on this week in particular has been separating himself from defenders and creating an open shot off the dribble.

“He’s not always explosive in the half court, in terms of getting by defenders,” Brownell said. “First-step quickness, both offensively and defensively, is a big part of what we will continue to address with him.”

The Tiger coach said he must also address some intangible areas of his game, such as playing through fatigue, and leadership. McDaniels and his sophomore classmates must become more vocal if a young 2012-13 Clemson team is to reach its potential.

“I expect a lot of our class,” he said. “We can take things we learned from the seniors, especially Tanner (Smith) and Andre (Young), and pass it on to the incoming freshmen. Each of us can take initiative to be leaders.”