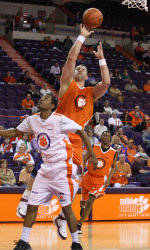 CLEMSON, SC — As Terrell McIntyre jacked up his final three-point attempt of the evening Friday night in Clemson’s Orange & White Alumni Game, the entire bench for the White team yelled at once, “Go get the rebound!”

McIntyre needed only one rebound to complete a triple double, which he never accomplished in his Clemson career.

“I didn’t know,” he said afterwards. “They were telling me, but I didn’t know what they were doing so I stopped and shot a three. That’s all I know. Just shoot the threes.”

He shot the threes, alright. McIntyre shot 16 of them, making eight. Despite not getting his first ever triple trouble, it was a good night nonetheless for the former Clemson star, as he finished with a game-high 30 points, 14 assists and nine rebounds in the White team’s victory at Littlejohn Coliseum.

Sixteen former Tigers played in the first alumni game, while 74 more watched as Clemson started its celebration of 100 years of basketball this weekend. There will be a special luncheon and halftime recognition at the NC State game Saturday for the University’s top 25 players of all-time.

“I enjoyed seeing all the old players come back, especially the ones who can still do it like (Greg) Buckner and McIntyre,” longtime Clemson fan Tee Suber said. “It was good to see them still be able to play at a high level. This was good for Clemson basketball altogether.”

Buckner, who is best known for his dunk with 0.6 seconds left to beat North Carolina in the 1996 ACC Tournament, scored 28 points to lead the Orange team.

It was a very entertaining night for all in attendance, as six players scored at least 22 points, including 22 from Tom Wideman, who played with both Buckner and McIntyre during the Tigers’ run of three straight NCAA Tournaments from 1995-97. Shawan Robinson, who played at Clemson from 2002-06, dropped in 28 points, while Matt Morris, the youngest alum playing in the game, added 26 points.

Chris Poole scored 22 points and Patrick Sapp added 12 more for the Orange team. Wideman had the most entertaining play of the night, when he heaved a desperation three from about 30 feet as time expired in the opening half, which bounced up, hit the top of the glass and rolled in.

“Wideman was going hard the whole game. I liked that,” Suber said. “He probably would have been pulled off the court if he did that in a real game.” Wideman had two three-pointers in the game, though he never made one during his four-year career at Clemson.

“He would not have gotten away with shooting all those threes in our playing days,” McIntyre joked. “I told him if I knew he was going to make that last one, I would have played defense on him. I let him shoot it thinking he was going to miss it. It was a good shot.”

White team head coach Trevor Booker, who currently plays for the NBA’s Washington Wizards, was thrilled to coach his squad to a victory in the first alumni game. He was also thrilled to have beaten both Elden Campbell, the Orange’s head coach, and Buckner.

“It was definitely fun,” Booker said. “I really enjoyed it. I got to coach some of the former players and coach against the other ones. I think the biggest thing I enjoyed tonight was beating Greg Buckner, though.”

Buckner says that might have been the case this time, but he wished he could have played Booker on the basketball court, and maybe it would have been a different outcome.

“I hate losing,” he said. “They put (McIntyre) on the other side, and I knew we would go at it, and he made a few more shots than I did. It was all in good fun, though, but I wish Trevor was out there so I could beat him.”