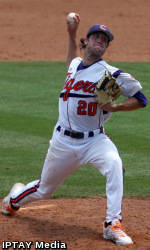 ClemsonTigers.com Exclusive: Firth Does His Job

GREENSBORO, NC – All Scott Firth was charged to do was find some kind of repellent to stop the constant stings the Georgia Tech Yellow Jackets were sending Clemson’s way Saturday in Game 10 of the ACC Tournament at NewBridge Bank Park in Greensboro, NC.

Through two innings, the Yellow Jackets scored five runs thanks to six hits – a two-run homer and three doubles.

Georgia Tech (35-24) got three of its five runs in the 5-1 victory in the first two innings, thanks in large part to pitcher Jake Davies, whose two-run blast to right field in the first inning proved to be the difference. But Firth did exactly what he was supposed to do. He became the bug spray Clemson needed him to be.

The Yellow Jackets managed only one run after the junior entered the game and that was due to an error.

“They had been hitting the ball well the whole tournament,” Firth said. “But the big thing for me was being able to keep them off balance a little bit and throw some curve balls and changeups in hopes of mixing it up a bit more and keeping them off my fastball.”

Before Firth came in for starter Kevin Pohle in the third inning with no outs, Georgia Tech had scored 26 of its 27 runs in the ACC Tournament. In 6.1 innings Saturday, Firth allowed the Yellow Jackets only four hits, while striking out two batters as he kept the Tigers in the game.

“He did a good job for us,” Clemson Head Coach Jack Leggett said. “He competed. They were seeing the ball very well. They are seeing it as well or better than anyone in the tournament, as evidenced by their game yesterday and then by the way they came out early today.

“They have three or four guys that are swinging the bats very well at the top of the order and they are cashing in. But (Firth) did a nice job stopping them there. We got out of that inning with just a couple of runs. We made an error that got one of the runs, but (Firth) did a really nice job from there on out. He gave us an opportunity, but we could not quite crawl back into it.”

That’s because Davies pitched just as well as Firth, limiting Clemson (33-26) to one run on two hits with three strikeouts in six innings of work. It was his first victory of the year on the mound.

Though the Tigers failed to capitalize on Firth’s strong effort, which ended their run in the ACC Tournament, it might benefit them in the upcoming NCAA Tournament. Firth says holding an offensive team like Georgia Tech down, one which scored 17 runs in a win over Virginia on Friday, can help his confidence when Clemson gets in a double-elimination tournament next week.

“More than anything, today helped me find all of my pitches,” he said. “I have mostly been working out of the bullpen this year later in games so I have been throwing primarily fastballs and sliders, and maybe a changeup every now and again.”

With Firth now using his full arsenal of pitches, and having the confidence to use it, Clemson’s pitching staff just got a little bit stronger as the NCAA Tournament starts up.