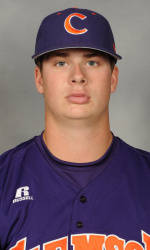 CLEMSON, SC – When a young man or woman decides to continue their athletic careers in college, there comes a period of time when adversity will strike.

Few student athletes at Clemson University have gone through the trials and tribulation that pitcher Doug Kingsmore Stadium.

Brady has had opportunities before. As a freshman in 2009, he opened the year with four appearances, including three starts. He was everything Leggett thought he would be and more. Though he did not record a decision, he posted a 1.69 ERA and was getting better.

But tragedy hit home as his father, John, lost his battle with cancer soon after the season started. His father’s death weighed heavy on his mind and heart, and Brady struggled to find the rhythm he opened the season with. After March 11 his season was done, and he was granted a medical red-shirt.

Over the next year, Clemson Head Coach Jack Leggett and pitching coach Dan Pepicelli worked diligently to help Brady find his control. When a pitcher all of sudden becomes wild, he sometimes has a tough time finding his spot again. But Pepicelli knew they could lead Brady back.

“We were patient with him,” Pepicelli said. “I just told him to put baseball back in balance with his life. It got to a point that he was stressed so much about every single pitch he was throwing. I just wanted him to be where he could just let it go.

“The thing that I noticed is when he would throw a couple of pitches he would be so hard on himself about the location of those pitches. He would look to see what I thought. I told him, `Kevin, it is an imperfect game. You have to let it go.’ The better he got at letting it go and trusting himself, the bigger his confidence got and that is where he is at now.”

After slowly bringing Brady along to start the 2010 season, his confidence returned. By the end of the year, Brady had become the Tigers’ most reliable bullpen pitcher as he recorded 25 strikeouts and had only two walks in his last 21 innings. He finished the year with a 4.20 ERA with 39 strikeouts against six walks in 30 innings over 20 relief appearances.

“He is a perfect example that you can come back from (control issues) like that,” Pepicelli said. “He is mentally a really, really tough kid and he just brought himself back. A lot of it was work he had to do, so he did it.”

Things were going great for Brady. He found his control again, and his arm was one of the strongest in the country. He opened the 2011 season by blowing the baseball past his competition. In his first start against Eastern Michigan, he totaled 10 strikeouts in only 5.1 innings of work, while allowing only one run and two hits. In his second start against Michigan State, he posted nine strikeouts through seven innings and did not give up a run.

Then South Carolina came to town. Again, the 6-foot-3, 220-pound righty started strong as he struck out four Gamecocks in four innings of work, while allowing only one run off three hits. But after the fourth inning, Brady felt something was wrong with his forearm and he was taken out of the game.

He had suffered a muscle strain and missed the next 71 days.

“He handled that real well,” Pepicelli said. “I think the bottom line is that the physical part in a lot of ways can be easier because you know that you are waiting for that to heal. Kevin certainly did not lack any confidence last year. He really trusted his stuff.”

Ultimately, Brady returned towards the end of the regular season, as he pitched one perfect inning in a win over Davidson, then came in and retired all five batters he faced, including four by strikeout, in Clemson’s 7-4 victory at Florida State.

“He threw for us at the tail end of the year, but he really could not throw a breaking ball. It was just his fastball,” Pepicelli said. “He went up to the Cape (Cod League) and was starting to get his breaking ball back a little bit. But between physical therapy and then us being in the postseason at the end, it was rush, rush, rush. He never got that time to shut it down and give his arm a chance to get back to full strength. He had to get his mind out of the rehab mode, which is what he needed.”

After being drafted in the 17th round of the Major League Baseball draft by the Cleveland Indians, Brady took the summer off for the most part and decided to return to Clemson for a fourth year.

Now he is ready to go out there and give it his all for Clemson and no one wants to see him succeed more than his head coach.

“He has been one of those guys who you want to see do well,” Leggett said. “He has really been through some tough times, but he has handle things extremely well.”

So well in fact, he has earned the right to start the season.

“It’s amazing. After watching Trey Delk, Casey Harman, and Scott Weismann be able to go out there the last three years, I feel excited I get to go out there, put on these cleats and throw the first pitch for the Tigers,” Brady said. “It is something I have really been looking forward to.

“It has mentally been straining, but it was a good experience for me. You are going to get injured in your career so I learned to make the best of it. I have really been fighting back and I put all of my faith in my coaches and my teammates. It has worked out, and I’m excited Coach Leggett trusts me with the ball on Friday.”