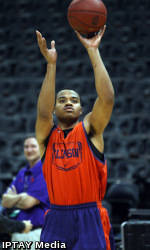 ATLANTA, GA – Growing up in Gastonia, NC, Bernard Sullivan only knew one thing when the first week of March rolled around.

“The ACC Tournament is a big thing,” the freshman said from his locker after Clemson concluded its 55-minute shootaround at Philips Arena Wednesday afternoon. “Everyone where I’m from – my family and friends – will be watching it. It’s actually all I remember watching growing up, and now I will actually get to play in it.”

Sullivan will play in it Thursday night when seventh-seeded Clemson plays Virginia Tech at 7:00 PM at Philips Arena in Atlanta. The game will be televised by ESPNU and the ACC Network.

Being from North Carolina, Sullivan loved to watch the ACC Tournament. As a child, the 6-foot-7, 225-pound forward never thought about playing in college basketball’s most prestigious conference tournament, though. He just loved to watch it.

“Being here is a great experience,” he said. “I never thought this was something I would do. It’s great.”

Though he is from the heart of SEC country, K.J. McDaniels also grew up an ACC Tournament fan. The Birmingham, AL native remembers watching the tournament from the time he was old enough to remember. His father, Kevin, always watched the ACC Tournament, and it rubbed off on his son. He knew at an early age the ACC was the conference he wanted to play in.

“I was really young, and I don’t remember exactly what game it was, but I remember North Carolina was in the finals. After watching it, I really wanted to play in it,” McDaniels said. “It’s an honor to be here and to be playing in this tournament. Just to walk out there on that court, see the ACC logo; it’s amazing to finally know I have made it here.”

Four years ago, Tanner Smith was that wide eyed freshman playing in his first ACC Tournament game. Like Sullivan and McDaniels, he too grew up watching the tournament and imagined what it might be like to play in it. He and his family would always buy wings and pizza and make it a weekend long event.

“We would sit down for a few days and enjoy tournament basketball and what it all brought,” the senior said. “I’m really excited again to be part of it for my last year.”

Ironically, Smith’s last year in the ACC Tournament will be in the same place he first experienced it as a player. The 2009 ACC Tournament was also played in Atlanta, but it was played at the Georgia Dome instead of Philips Arena.

“It’s weird. Everything has been brought full circle for our senior class,” he said. “I have thought about how this is going to be the last one, and how it is going to be a little bittersweet. But, it is nice to end my experience here in Atlanta where most of us have some good memories coming down here.”

Smith’s first ACC experience, from an individual standpoint, was a good one. The Alpharetta, GA native was 4-from-6 from the field and scored 10 points, all in the first half.

“I was really nervous at first, but I went out there and made a couple of shots and that went away,” he said. “You have to go out and play like it is any other game, but you also have to realize that the stakes are different, too.

“Each possession is so critical. It can send you home at any time.”

It’s that importance Smith, along with fellow seniors Andre Young, Bryan Narcisse and Catalin Baciu are expressing to the freshman. Smith and Young both spoke about how fun playing in the ACC Tournament was as freshmen, but they also said experiencing the tournament on the weekend is even better.

Last year, the Tigers advanced to the semifinals of the ACC Tournament before falling to North Carolina in overtime.

After all, it is the ACC Tournament, and a player is only a freshman and a senior one time.

“You have to really embrace your opportunities,” Young said. “Not a lot of guys have this opportunity. You have to take advantage of it.”