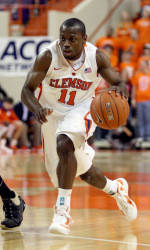 CLEMSON, SC – The odds that Clemson and Virginia will score more combined points Tuesday night (7:00 PM on ESPN2) at John Paul Jones Arena than the AFC and NFC did in Sunday’s NFL Pro Bowl is unlikely.

“We will see,” Clemson guard Tanner Smith said. “It will be a defensive battle, but maybe I’m wrong. Maybe the offenses will come to life, too.”

In case you are wondering, the AFC defeated the NFC 59-41 in the Pro Bowl, and when you take into account what the Cavaliers and Tigers are allowing per game, there is something to that statement. Virginia leads the ACC by allowing its opponents just 50.6 points per game, while Clemson is yielding only 59.7 points a game, second in the conference.

“They have that kind of defense that is tough to score against,” Smith said. “It is tough to score for 40 minutes against them. We are going to have to do a good job moving the ball around and getting good shots. We cannot get frustrated if we miss a few. We have to stay confident.

“If we have open looks, we have to take our best opportunities and try to knock down those shots.”

There are not too teams doing that against Tony Bennett’s team these days. Opponents are shooting just 38.8 percent from the field against Virginia (17-3, 4-2 ACC), which has led to a 13.7 margin of victory for the Cavaliers.

“The numbers are not misleading, they are just very, very sound defensively,” Clemson Head Coach Brad Brownell said. “They play the pack-line man-to-man defense he learned from his father. They will guard the ball hard, but they will not really deny any passes. They are not trying to steal the ball from you, but they are protecting the paint.

“They want to keep the ball out of the paint, and make you take contested shots. They double the post quickly when you throw it inside and they make your post players make passes and make decisions on things that post guys sometimes do not do so well.”

When listening closely, it sounded as if Brownell was talking about his own team. Clemson’s goal is to create havoc on the defensive end as well. Opponents are shooting only 41.9 percent from the field against the Tigers (11-9, 3-3). But Clemson has also produced 297 turnovers this season, turnovers that Brownell says makes what the Tigers do a little bit different than what the Cavaliers do.

“Since I have come here, I have been a little more aggressive with our defense,” Brownell said. “I thought since I was taking over from Oliver (Purnell), one of the things I did not want to do was be so drastic in my change that the guys fought it. So, I made some decisions to try and still pressure and do some things that they (returning players) were used to in terms of aggressiveness and defense.

“I felt like we needed to knock some balls loose and get some turnovers for points. I think our team this year needs it as well. We are not as good to be able to come down and execute all the time.”

But the Cavaliers also do not turn the basketball over, making things that much harder for the Clemson offense.

“They don’t turn the ball over and they don’t take very many bad shots,” Brownell said. “That makes their transition defense outstanding. They may not send as many guys to the offensive board as some people so they are always back and you don’t get easy baskets against them.

“You get eight to 10 points off a transition three or you turn it over and get a layup or dunk. Virginia does not turn the ball over very much so you have to score against their set defense, which is not easy to do. It is not easy to score five-on-five and they do as good as job as anybody in playing half court defense.”